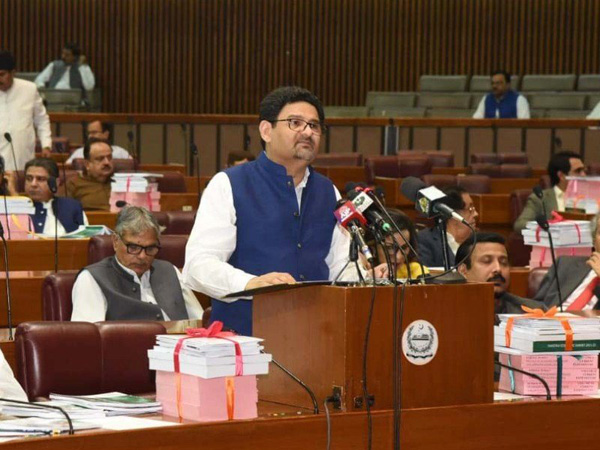 Amid strict conditions slapped by the International Monetary Fund (IMF) for revival of $6 billion loan program, Federal Minister for Finance and Revenue Miftah Ismail Friday unveiled the ‘toughest’ federal budget 2022-23 in the National Assembly with an outlay of over Rs9.5 trillion.

The lower house of parliament was less chaotic than the last few presentations during the PTI government’s tenure in the absence of opposition after the PTI members had tendered their resignations.

Ismail began his speech by bashing the PTI government, saying its policies had hurt the economy and damaged the lives of the people.

“An inexperienced team brought the country to the brink. Different people presented the budget every year presenting different policies which hurt the investor sentiment,” the finance minister said, adding that his government had begun repairing the economy by taking tough decisions that were the need of the hour.

The poor-income group needs to be supported, he said, adding that the group buys goods that are produced in the country. “Bringing economic stability is our top priority. The basic problem of our economy is that a growth rate of 3-4 percent does not help our growing population, whereas a growth rate of 5-6 percent leads to a current account deficit.”

He criticised former PM Imran Khan by saying that he never cared for the poor, for he himself said “keeping a check on potato and tomato prices is not a PM’s job”.

The minister said the Budget 2022-23 will focus on providing facilities to farmers growing crops that produce cooking oil, like corn and sunflower, so that the country doesn’t have to import palm oil, which is touching a record high in international markets. “We will increase the agricultural production to increase arable produce and increase per acre yield while also focusing on the development of industries which can help increase the exports of the country,” he said. According to Ismail, the PTI-led govt took loans of Rs20,000 billion during their tenure. “This is 80 percent of the total loans taken since the time of Liaquat Ali Khan.” This was because they spent more than they earned, he recalled.

Defence expenditure is budgeted at Rs1,523 billion which makes up 17.5 percent of total current expenditure and is 11.16 percent higher than last year.

Interest payments, or debt servicing, budgeted for FY23 have risen a whopping 29.1 percent from last year to Rs3,950 billion making up the single largest expenditure of the government, which accounts for 45.4 percent of total current expenditure.

The government has set the tax collection target for the Federal Board of Revenue (FBR) at Rs7,004 billion for FY23, which is 20.1pc higher than last year’s Rs5,829bn.

Fiscal deficit, or overall budget deficit, which is the difference between the government’s total expenditure and revenue is calculated as Gross Revenue at Rs9,004bn (minus) Transfer to Provinces Rs4,100bn (plus) Provincial Surplus Rs800bn (minus) Total Expenditure Rs9,502 billion.

Total allocations for the Public Sector Development Programme (PSDP) have been budgeted at Rs2,158 percent for FY23, up just one percent from Rs2,135 percent last year.

Under this, federal PSDP makes up Rs727 percent, which has gone down 19.2pc from last year’s budgeted amount of Rs900 percent.

Provincial PSDP for FY23 has been allocated at Rs1,432 percent, a decrease of 16pc from last year’s budget of Rs1,235 percent.

The minister said the government had to move towards “sustainable growth”, adding that the growth target for the next year was set at 5%.

“The problem of our economy is that growth is 3-4 percent but when it moves up to 5-6 percent, our current account deficit goes out of control, because we give priority to the elite, which increases our imports. We need to adopt new thinking, to facilitate the lower-income section to increase domestic production,” the minister said.

He said the government had to move towards sustainable growth, adding that the growth target for next year was set at five percent.

“The government is aware that the common man is struggling with high prices and we are doing our best to bring them down,” Ismail said, adding that the government had set a target for 11.5 percent inflation next year.

He announced an increase of 15pc in the salaries of government employees. He said the government had imposed a capital gains tax on immovable property held for up to one year at 15 percent which will reduce by 2.5 percent every year to zero percent after six years.

Advance tax on sale and purchase of property for non-filers has been kept at five per cent while it is two percent for filers.

Addressing the Speaker National Assembly Raja Pervez Ashraf, Ismail assured that the coalition government will pull Pakistan out of the economic crisis.

Miftah added that in the next fiscal year, the country had to improve the economic conditions of the poor by providing them with facilities.

“When the income of the poor people increases, they purchase consumer goods which are produced locally. And this, in turn, reduces the exports and initiates the development process. We can achieve inclusive growth by taking the above-mentioned steps,” he said.

The finance minister further highlighted that Pakistan has become the third-most-expensive country due to the incompetency of the PTI-led government.

“Prime Minister Shehbaz Sharif wants to provide maximum relief to the people, particularly to those who are unable to bear the burden of rising inflation,” he said, revealing that for this purpose, the government had taken several decisions to provide subsidies.

The finance minister proposed that families using less than 200 units of electricity will be given loans in easy installments for purchasing a solar panel, while the government is also considering abolishing sales tax on agricultural machinery and seeds.

The finance minister said if a person has an immovable property of Rs25 million or more, then 5% of its rate will be considered as an individual’s additional income. He said that on this income, the government would charge a 1% tax. In case a person holds an immovable property for more than a year, then they will be charged with 15% capital gain tax, which will become 0% after six years, he said.

Moving forward, Miftah said Rs73 billion had been allocated for payment of arrears of the petroleum sector, and the gas rate for the industrial sector will be announced soon.

The finance minister added that the government had prioritised the transmission and distribution of electricity and will be assigning importance to it.

“In this sector, the government has provided Rs214 billion in additional subsidies in the first three months so that the burden of the previous government’s [policies] does not fall on the masses,” he said. In the next fiscal year, it has been proposed to allocate Rs570 billion for this sector so that the people could survive the scorching heat and have electricity supply in their homes. Miftah announced that the proposed budget for the health sector would be more than Rs20 billion, which has been decreased, as the previous government had allocated more budget to health due to the coronavirus pandemic.

For dealing with different diseases, better facilities for people, and ensuring medical instruments are available to medical facilities, the budget for the sector will be Rs24 billion, he said.

The finance minister said agriculture is the backbone of the country’s economy and, in this regard, the government had decided to increase its grant and allocate Rs21 billion for the sector.

“This will help increase the output of the sector. Moreover, the Ministry of National Food Security & Research has devised a growth strategy for the next three months with the help of the provinces and planning commission,” he said.