* The actors, who've been keeping their fans updated with BTS photos and videos from their time on set together, seem to share a friendly relationship offscreen too 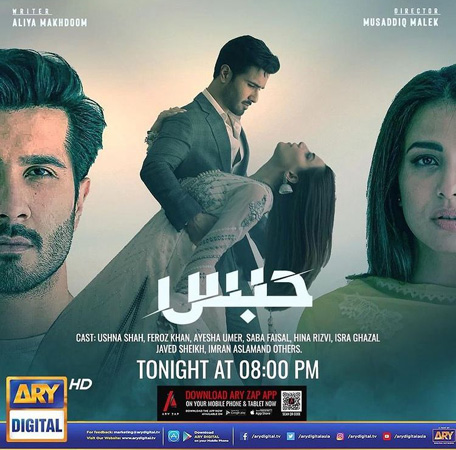 With new shows and new pairings, a new love boat is sailing and might we add, it’s sailing quite well.

Television serial Habs starring Feroze Khan, Ayesha Omar and Ushna Shah, has grown on viewers, courtesy of its strong storyline and stellar cast. But what’s got fans swooning is the striking chemistry it features between Ushna and Feroze. Social media users even created a “ship name” for the actors called #UshRoze.

The actors, who’ve been keeping their fans updated with BTS photos and videos from their time on set together, seem to share a friendly relationship offscreen too. Their comfort and respect for each other seems to have translated on screen. With the strong-headed but financially-needy Ayesha joining the wealthy but tied-at-the-hands-of-tradition Basit’s office as his PR, their interactions only get intimate with time.

Despite being engaged to Soha, Basit can’t help but develop feelings for his employee – although problematic and against work ethics – fans of the show are loving their budding relationship.

A fan started a thread of all the “cute” gestures Basit makes for Ayesha as a boss. “He gave her two hours to complete the presentation! They’re so cute.” Another wrote, “She got his medication for him from his car and he thanked her.” Added another.

“When their eyes meet, the world stops,” wrote one tweep on the microblogging site with a snippet from the show. And apparently, a lot of drama-viewers are into the office romance trope. A fan wrote, “I’m so into this boss-assistant thing we have going on.”

Another shared, “The most loved trope of some steamy office romance between boss and his PA. I can’t believe we are already getting this; she’s feeding him medicines.”

Sharing a poster from the series, a fan wrote, “Ayesha’s eyes on Basit while her hands on him, I can’t wait for their love story to begin.” It’s only the beginning with Basit’s inability to fire Ayesha and fans are hoping it goes further! “I can’t process the kind of scintillating chemistry they share. She’s literally into him, how I can’t wait to see the live track!”