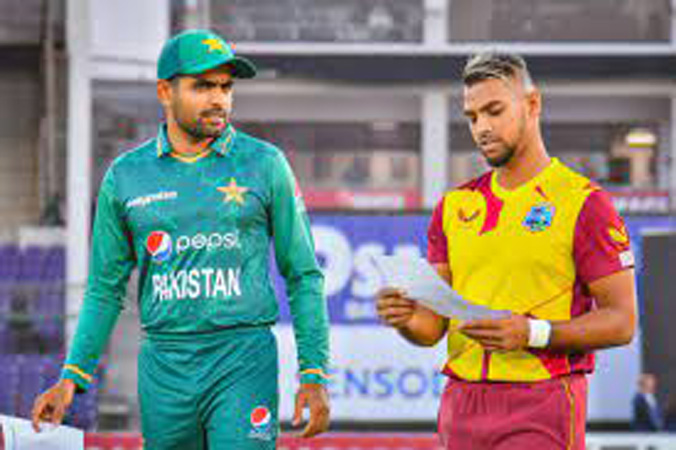 LAHORE: Intense heat will be no issue when Pakistan take on West Indies in the second one-day international (day and night) at Multan Cricket Stadium in Multan on Friday (today). Pakistan won the first match by five wickets after a thrilling contest. West Indies gave brilliant performance while batting first on Wednesday night. The scorching Multan heat — with temperatures soaring to between 40 to 42 degrees Celsius (104 to 107 degrees Fahrenheit) — did not stop Shai Hope and Shamarh Brooks, who both batted with guts and power to help their team pass 300 to set a formidable target for the hosts. But skipper Babar Azam and his men overhauled the target in 49.2 overs. Along with the win, Babar became the first batsman to twice score three consecutive centuries in one-day internationals after his 103 helped Pakistan race home. Babar shared a 103-run partnership with Imamul Haq (65) and a 108-run stand with Mohammad Rizwan (59) as Pakistan chased down a target of 306 in Multan to go 1-0 up in the three-match ODI series. The 27-year-old Babar made two centuries against Australia before Wednesday’s match and also racked up three tons in a row in 2016, all against West Indies. Babar hit nine fours in his 17th ODI century and the world’s top-ranked ODI batter also surpassed former India skipper Virat Kohli to become the fastest player to reach 1,000 runs as captain. Babar achieved the feat in 13 innings compared with Kohli’s 17.

West Indian skipper Nicholas Pooran is all praise his team. “Getting 300 plus in tough conditions was a great effort,” said Pooran. “I am proud of the guys and although result did not go our way but that’s cricket.” He said they would try their best in the remaining matches to win the series to get crucial points in the ODI Super League, a qualification process for 2023 World Cup (50 overs) to be hosted by India.

Pooran acknowledged that for West Indies, beating Pakistan in Pakistan was a challenge from the outset, but wanted his team to accept it instead of fearing it. As for tangible goals for the Pakistan series, Pooran revealed two such plans: hold on to catches and bat long as a team, consistently. “Some world-class bowlers and batsmen here for Pakistan, but I want the players to embrace the challenge,” he said. “If we can take our catches, get some runs, you never know what can happen, the game can turn in a couple of balls. We want to use our momentum and continue to be consistent as a team.”

It is interesting to note that even the intense heat prevailing in Multan failed to deter fans from travelling for the city’s first international match after 14 years. Many of those walked for a couple of kilometers in scorching temperatures of 46 degrees Celsius just to be there. Multan had not hosted an international match since the one-dayer between Pakistan and Bangladesh in 2008. The opening match of the three-game ODI series between Pakistan and the West Indies finally ended that long wait. The series was set to be played in Karachi at the end of last year but was postponed after a number of Covid-19 cases in the West Indies camp. When the dates were finalised for the series this year, Rawalpindi was the chosen venue only for political uncertainty in nearby Islamabad forcing it to be shifted to Multan.