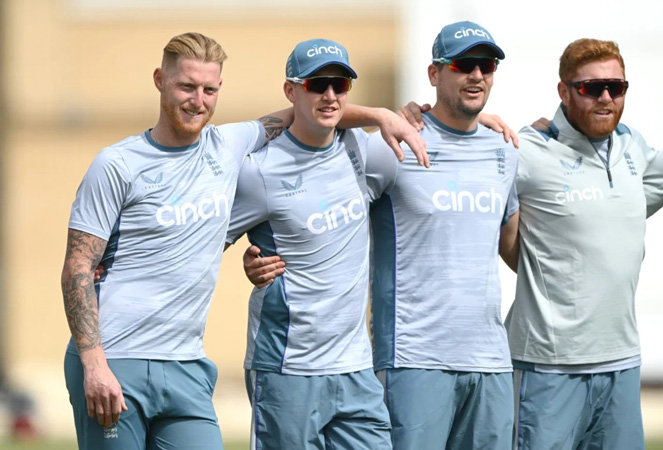 LONDON: England will aim to carry on from where they left off under their new leadership duo of captain Ben Stokes and coach Brendon McCullum, the former New Zealand skipper, when they face the Black Caps in the second Test in Nottingham starting Friday. They are 1-0 up in this three-match series after a five-wicket victory over New Zealand at Lord’s last week gave England just their second win in 18 matches at this level. Now Stuart Broad wants to gee up the crowd at Trent Bridge, his home ground, just as he did in changing the momentum at Lord’s, when New Zealand lost three wickets in three balls to spark a collapse of six for 34 on the third day. Daryl Mitchell (108) and Tom Blundell (96) had shared a partnership of 195 to leave New Zealand, the World Test champions, well-placed.

But Broad, returning alongside James Anderson after England’s all-time leading Test wicket-takers were controversially left out of a series loss in the Caribbean, got his team back into the game as he waved his arms at spectators. Broad had Mitchell caught behind and bowled Kyle Jamieson, either side of the careless Colin de Grandhomme’s run out by Ollie Pope. England eventually won by five wickets, with Joe Root making a commanding 115 not out in his first Test since resigning as captain. Broad is now looking to capitalise on a party atmosphere created by football club Nottingham Forest’s recent promotion to the Premier League.

‘Nottingham roar’: “I ran in and felt the ground was a bit quiet, so let’s get this ground going,” said Broad as he reflected on the first Test. “I know that’s when I’m at my best….I need to take that into Trent Bridge, because if I get that Nottingham roar, with the party mode the Forest fans are in, it could have a huge benefit.” The 35-year-old Nottinghamshire seamer is, however, well aware of the risks of such an approach: “If you whip the crowd up, then bowl a half-volley and go for four you look daft. But I quite like that pressure.” Durham quick Matthew Potts took an encouraging seven wickets on debut at Lord’s but England still have decisions to make about both their bowling and batting line-ups in Nottingham. Pace bowling all-rounder Stokes, who has been managing a knee injury, sent down just 9.4 overs at Lord’s, while spinner Jack Leach was concussed early in proceedings while fielding and had to be replaced by Matt Parkinson.

If England are concerned about Stokes’s ability to play a full part with the ball, they could bring Craig Overton into the team. New Zealand were arguably inches away from victory at Lord’s given Stokes was on one when bowled by a de Grandhomme no-ball before making a valuable 54 in England’s second innings, having come in at 69 for four after a familiar collapse. England’s specialist batsmen could yet be retained in the XI even though the uncapped Harry Brook, averaging a colossal 140 for Yorkshire in this season’s County Championship, remains in the squad. New Zealand didn’t do that much wrong at the ‘Home of Cricket’, although they would dearly love a big score from captain and star batsman Kane Williamson at Trent Bridge.

“We were probably a moment or two away from winning the last game, so we’ll stay focused on what we do well and if we do that I think we’ll be alright for this one,” said towering paceman Jamieson, who took six wickets at Lord’s. De Grandhomme, whose lack of attention with bat and ball proved pivotal, has now been ruled out of the rest of the series with a heel injury, meaning fit-again batsman Henry Nicholls is in line for a recall. New-ball duo Trent Boult and Tim Southee should be better for their first-Test stints but New Zealand could freshen up their attack by bringing in either Neil Wagner or Matt Henry, with Ajaz Patel’s place uncertain after the spinner bowled just two overs at Lord’s.