In ‘Snow in Midsummer,’ it’s not just the forecast that’s amiss 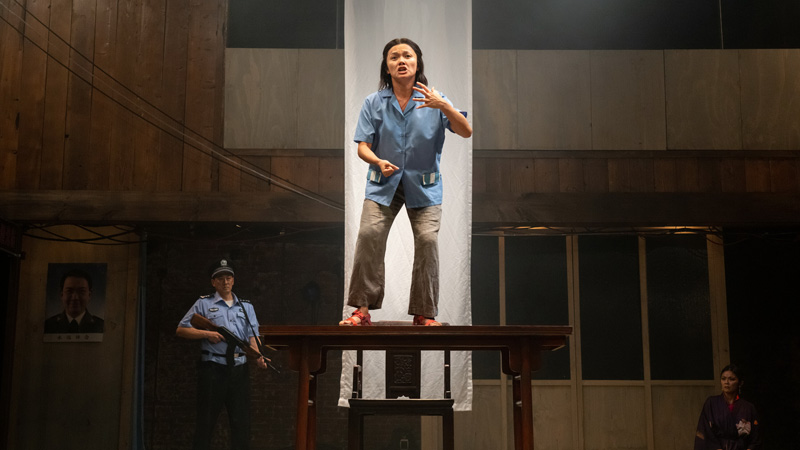 In the Chinese town of New Harmony, a three-year drought has ravaged the landscape. The lake has evaporated. Ash falls from the sky. Nothing grows. While some characters blame global warming, these natural disasters have a supernatural explanation. A young widow has been executed for a crime she did not commit. Before she dies, she curses New Harmony: Until she is avenged and buried, the town will suffer.

In these broad, climactic strokes, Frances Ya-Chu Cowhig’s “Snow in Midsummer,” at Classic Stage Company, resembles the 13th-century Yuan dynasty drama from which it is adapted, “The Injustice to Dou Yi That Moved Heaven and Earth.” A commission of the Royal Shakespeare Company’s Chinese Classics Translations Project, the play updates a classical tragedy. But in this Classic Stage production, with hectic, erratic direction by Zi Alikhan, the translation appears garbled, stranding the play among genres and tones. A ghost story, a murder mystery, a family melodrama, and a tale of greed both corporate and personal, it has been staged in ways that confuse place, time and intention.

After a prologue set three years in the past, before the execution, the play proper begins with the arrival of Tianyun, a self-made woman intent on buying a local factory, and her adopted daughter, Fei-Fei. Tianyun makes and distributes synthetic flowers, as no real ones can grow in this drought-stricken town. Selling the factory is Handsome Zhang, who will use the money to relocate with his fiancé, Rocket Wu. But the hungry ghost of the widow, Dou Yi, threatens these transactions.

The script exists on multiple planes – reality, surreality, memory – which the production collapses. There’s fog everywhere, and Jeanette Oi-Suk Yew’s evocative lighting is ghostly throughout. The set, by the design collective dots, is an undistinguished wooden platform, sometimes adorned with posters or flags or blood. The stage’s loft is at first a love nest. And then it is the afterlife. This offers little sense of place. I couldn’t possibly tell you how remote New Harmony is, how prosperous, how contingent on an actual China. The period seems confused as well, which does not feel like a deliberate choice. One character speaks of the Cultural Revolution as if it were fairly recent. But then how to explain the cellphones?

Cowhig’s heightened language clarifies little. Queering a central relationship and applying the lens of climate change refreshes a classical drama. But in rendering the play as a mystery, Cowhig delays solutions until the middle of the second act, which means the audience will spend more than an hour watching characters without remotely understanding the reasons for their behaviour, rendering the psychology somewhat flat.

There are gestures toward implicating the audience in Dou Yi’s fate, but these are incomplete. In an early scene, Dou Yi offers her wares to several spectators. Each person seemed keen to buy one. In keeping with the script, the actress had to pretend otherwise.

Chinese theatre is so little seen here and in a time in which threats to Asian American and Pacific Islander communities feel more pronounced than ever, representation seems critical. But this play feels inchoate and its cast of Asian American actors underserved. At the performance I attended, several of the actors seemed under-rehearsed, others had vocal difficulties. Leung, in her bloodstained shroud, was made to scream and scream and scream.

The play’s themes – a classical riff on no justice, no peace, a reckoning with the human impact on the environment – should reverberate. Instead only the screams echo. “Snow in Midsummer” may haunt you. But not in the ways that a ghost story should.