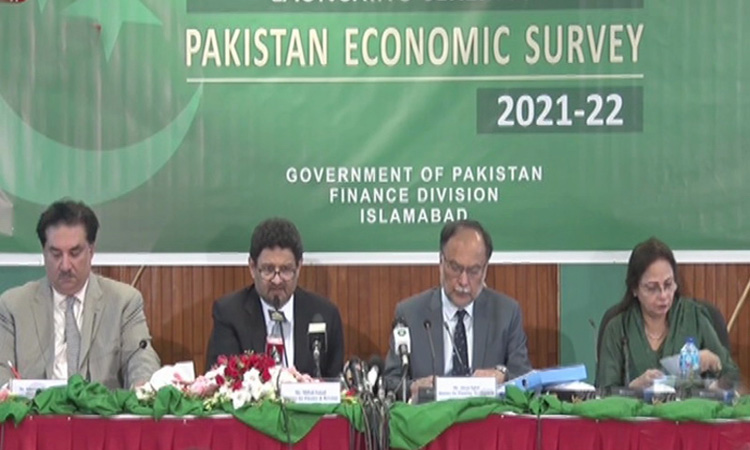 A day before announcing the Federal Budget 2022-23, the coalition government reflected upon performance of the economy for the outgoing fiscal year with a growth of 6% against the envisaged target of 4.8%.

“The situation in Pakistan has remained the same whenever the country records growth but, unfortunately, it falls into the crisis of current deficit,” Miftah said in a televised press conference.

The survey document released by the Ministry of Finance, however, noted that though the economy recovered from the pandemic (a 0.94% drop in FY20) and maintained a V-Shaped recovery by posting real GDP growth of 5.97% in the fiscal year 2022, this high growth is “unsustainable” and has resulted in “financial and macroeconomic imbalances”.

This overall growth came on the back of 4.40pc growth in agriculture, 7.19pc growth in industries, and 6.19 percent growth in services – meaning that all three major sectors surpassed their targets of 3.5pc, 6.5pc and4.7pc, respectively, says a news report.

It is worth mentioning that the National Economic Council (NEC) has approved the annual targets for the upcoming fiscal year 2022-23 including the economic growth target set at 5%, along with the commitment to make efforts to raise it to 6%, says a news report.

He said historically, Pakistan’s economy had shown periodic boom-bust growth cycles. And the reasons for such volatile growth cycles included the wide-ranging economic challenges like shrinking fiscal space, exchange rate pressure, mounting current account deficit, and inflation, among others. “The same has happened this time as well, the recent 5.97% growth recorded during the outgoing fiscal year 2021-22, according to the new estimates, has pushed Pakistan towards the balance of payments and current account deficit crisis,” the finance minister lamented.

He further highlighted imports have also increased by 48% as compared to the last fiscal year, while the exports have also moved up, adding that the trade deficit stood at $45 billion. “I assure you that till Tuesday next week, the issue of foreign exchange reserves will be resolved as the expected $2.4 billion will be transferred from China,” he said.

The finance minister added that former prime minister Imran Khan left “landmines” – referring to subsidies – for the incoming government and it was tantamount to “giving people cheques that would bounce”. “He knew that his government was going to be ousted, therefore, he left landmines for the next person to come in power – and that currently is Shehbaz Sharif […] but now was the time to rectify Pakistan’s economy.”

Miftah said the coalition government had saved Pakistan from defaulting, and from now, the country will witness “sustainable growth with responsibility”.

The finance minister said the growth would be sustainable as the country would not repeatedly see a balance of payment crisis and current account deficit.

He said that in the previous years, the exports were around half of the imports. However, the export-to-import ratio stood at 40:60 now, adding that Pakistan could only finance 40% of its imports through exports, and for the rest, it had to rely on remittances or loans – which makes the country remain stuck in a balance of payments.

“We also need inclusive growth. We have always facilitated the elite so they could boost the industry and benefit the economy. This is one strategy, but when we provide privileges to the elite, then our import basket gets heavier,” he said. “A rich person spends a lot on imported items as compared to a low-income person, he said, adding that the government should financially empower the low-income segments of society to boost local production,” he said.

“If we do this, then maybe our domestic and agriculture production would increase, but it will not move up our import bill. This growth will be inclusive as well as sustainable,” he said.

According to the Pakistan Economic Survey, for the outgoing fiscal year, the inflation target was set at 8%, but an “abnormal” increase in global commodity prices especially crude oil and edible oil has soared the domestic prices since Pakistan is a net importer of these essential items.

“It is the sixth consecutive month when the inflation rate has remained in double-digit. Consumer Price Index (CPI) in April 2022 stood at 13.4% on a year-on-year basis which was up from 12.7% in the previous month and 11.1% in April 2021,” the document showed.

Meanwhile, the pace of food inflation surged 15.6% in urban and 17.7% in rural during the month of April 2022. The CPI Inflation, recorded at 11% on average during July-April FY22 as against 8.6% in same period last year.

The finance minister added that since energy prices are too high in Pakistan, the local industry was “uncompetitive.”

He said gas supply to all industries has resumed after being shut for some time, noting that the supply to industries would not have been stopped had the PTI government entered long-term agreements.

The previous government did not make long-term plans, forcing Pakistan to buy energy and oil at costlier rates, which is leading to worsening the economy of the country.

“And this is not PML-N, JUI-F, PPP, or the coalition government’s economy whose economic situation is worsening; it is the state of Pakistan that is seeing an economic turmoil,” he said.

The finance minister, talking about the foreign direct investment (FDI), said it was around $2 billion in 2017-2018, but it stood at around $1.25 billion in the first nine months of the outgoing fiscal year.

Miftah said the trade and current account deficits have increased as compared to 2017-18 – the fiscal year when PML-N’s government ended – as an “incompetent” ruler was imposed on Pakistan. Miftah said although coronavirus was once in a lifetime pandemic, the government missed historic opportunities. “After COVID, oil and gas were at record-low rates, which the PTI government missed.”