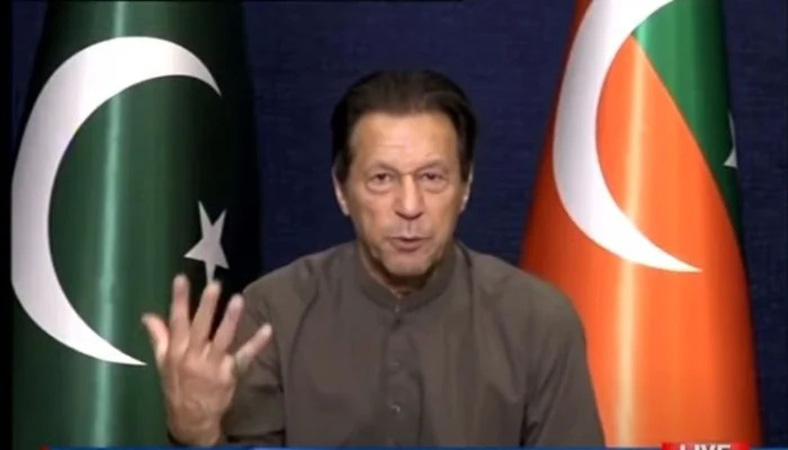 Hours after the economic survey was presented by Finance Minister Miftah Ismail, PTI Chairman and former prime minister Imran Khan said the nation will now come to know what inflation was. Imran said the data of the survey testified to PTI’s claims of a thriving economy. In a televised address, Imran said the economic survey had endorsed the performance of the PTI government. He said the country was on a path of progress during the last two years which was backed by the figures in the survey. He said the Gross Domestic Product (GDP) growth was nearly 6% during the last couple of years and growth in different sectors was also evident. Further, he said that the tax revenue rose to Rs6 trillion while the exports surged to$32 billion. Imran said remittances had reached $31 billion which was a testament to the overseas Pakistanis trust in the PTI government. Responding to the debt rhetoric of opponents, he said PML-N left the GDP to debt ratio at 64% and PTI maintained it despite paying interest double than it was during PML-N’s government. He said Pakistan outshone other countries in the subcontinent in employment opportunities despite the Covid-19 pandemic. Imran said they did not succumb to the pressure of International Monetary Fund (IMF) and thought for the people. He said ‘pet’ journalists, who used to criticize the PTI government for inflation, had vanished. He said the incumbent government massively hiked the fuel, gas, and electricity prices only in two months while the prices of daily-use commodities have also soared. He said the rate of cement had also surged which would post its impact on the once-booming housing industry, says a news report. He said the PTI government endeavored to lift the underprivileged class, adding that the people would experience the real taste of inflation in the utility bills of next month.

The former premier said the PTI government introduced universal health coverage under the Sehat Card which, he termed, the milestone of his government. He also cited Ehsaas and Kamyab Jawan programs as the notable measures of his government to lift people out of poverty.

PTI chairman said these figures would not have been the same if he had shut down the country during the pandemic peak as demanded by the then opposition parties.

The PTI chairman contended that due to ineligibility and mismanagement, the government doesn’t have the money to pay the power plants running on imported coal established during the PML-N’s government.

He added that the PTI government started projects of 10 new dams which included three big dams however lamented that downgrading by Moody’s would harm progress of those projects.

This would also make it difficult for WAPDA to borrow loans from international lenders, he feared and added that it would not only rule out the option of cheaper electricity production but would also cause paucity of water in the future.

The former prime minister said NAB and FIA have been practically abolished today which would give liberty to the corrupt people to plunder the country. He said the thieves have been made the guardians and asked the Supreme Court if the amendments in NAB law go with the spirit of the Constitution.

Imran Khan said the government is also involved in gerrymandering, and they would soon approach the court against new delimitations.

PTI chairman claimed that the house of a NAB officer of Rawalpindi probing cases against ex-president Asif Ali Zardari was raided to intimidate him while he also cited sudden deaths of FIA official Dr Rizwan and Maqsood Chaprasi, expressing doubt that it was done by the ‘mafia’ in power.

Imran Khan said he would soon give the call for the biggest protest against the injustice being done to Pakistan.

“Dollar has reached Rs202 and its impact will come forward now. I fear how will a normal household manage its budget,” said Imran.

“They used to say we are incompetent and the economic condition is now in front of you,” said Imran Khan. He added that “if the country defaults” then it would take a lot of time to get up.