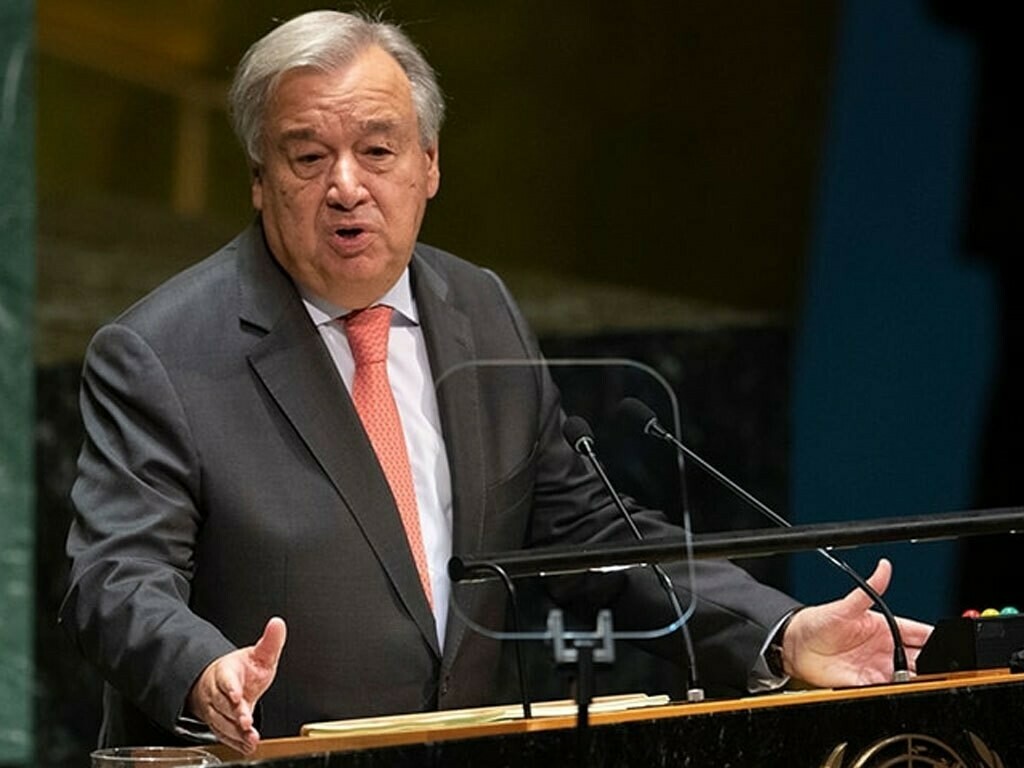 UN chief Antonio Guterres said Wednesday that the consequences for the world of Russia’s invasion of Ukraine are worsening, with 1.6 billion people likely to be affected.

“The war’s impact on food security, energy and finance is systemic, severe, and speeding up,” the Secretary-General said, presenting the UN’s second report into the repercussions of the conflict.

He added that “for people around the world, the war is threatening to unleash an unprecedented wave of hunger and destitution, leaving social and economic chaos in its wake.”

Guterres said that while this year’s food crisis is “about lack of access,” next year’s “could be about lack of food.”

“There is only one way to stop this gathering storm: the Russian invasion of Ukraine must end,” he pleaded in a speech.

The head of the world body said he had asked colleagues to help find “a package deal that allows for the safe and secure export of Ukrainian-produced food through the Black Sea, and unimpeded access to global markets for Russian food and fertilizers.”

“This deal is essential for hundreds of millions of people in developing countries, including in sub-Saharan Africa,” said Guterres.

The UN report, led by diplomat Rebeca Grynspan, says that an estimated 94 countries, home to around 1.6 billion people, are “severely exposed to at least one dimension of the crisis and unable to cope with it.”

“Out of the 1.6 billion, 1.2 billion or three quarters live in ‘perfect-storm’ countries that are severely exposed and vulnerable to all three dimensions of ﬁnance, food, and energy, simultaneously,” it adds.

The report says that the war may increase the number of food-insecure people by 47 million people in 2022, bringing it to 323 million by the end of the year.

It is estimated that up to 58 million more Africans may fall into poverty this year, the document adds.

Extreme poverty in the Middle East and North Africa could increase by 2.8 million people in 2022, while in South Asia 500 million people are at risk, according to the report.

“Concrete eﬀorts should be made to ensure critical supplies of food and energy reach the most vulnerable,” the report says.

Russian forces are now largely in control of the key eastern Ukrainian city of Severodonetsk amid fierce fighting, Kyiv said Wednesday, as UN chief Antonio Guterres starkly warned the war’s impact on the world was worsening.

The strategic city has become the focus of Russia’s offensive as it seeks to seize an eastern swathe of Ukraine, after being repelled from other parts of the country.

“Severodonetsk remains the epicentre of fighting in the Donbas,” said Ukrainian President Volodymyr Zelensky, referring to the region in eastern Ukraine that includes the provinces of Lugansk and Donetsk.

“It is a very fierce battle, very difficult, probably one of the hardest in the course of this war,” Zelensky said in his evening address to the nation.

Sergiy Gaiday, governor of Lugansk, which includes Severodonetsk, conceded that Ukraine’s forces might have to pull back as Russian troops were shelling the city “24 hours a day”.

Later in the day, he said on Telegram that Moscow’s forces control “a large part” of the city — but that its industrial areas were still held by Kyiv.

“The fighting is only going on in the streets inside the city,” he added.

Russia’s offensive is now targeting the Donbas, after its forces were pushed back from Kyiv and other areas following the February 24 invasion.

The cities of Severodonetsk and Lysychansk, which are separated by a river, were the last areas still under Ukrainian control in Lugansk.

Lysychansk remains fully under the control of the Ukrainian army but is under “powerful and chaotic” shelling, Gaiday said, accusing Russian forces of deliberately targeting hospitals and humanitarian aid distribution centres.

“The destruction is enormous,” he added.

Guterres warned Wednesday that 1.6 billion people were likely to be affected as the consequences of Russia’s invasion of Ukraine worsened.

“The war’s impact on food security, energy and finance is systemic, severe, and speeding up,” the UN secretary-general said.

He added that “for people around the world, the war is threatening to unleash an unprecedented wave of hunger and destitution, leaving social and economic chaos in its wake”.

“We are ready to do this in cooperation with our Turkish colleagues,” Lavrov told reporters in Ankara amid warnings of shortages worldwide partly blamed on the Russian invasion.

At the request of the United Nations, Turkey has offered its services to escort maritime convoys from Ukrainian ports, despite the presence of mines — some of which have been detected near the Turkish coast.

Kyiv said it would not demine waters around the Black Sea port of Odessa to allow grain exports, citing the threat of Russian attacks on the city.

“If we need to open up the international market to Ukrainian grain, we see the removal of obstacles standing in the way of Russia’s exports as a legitimate demand,” he said.

Kyiv, which was not represented at the Ankara talks, pushed back against claims that Western sanctions on Moscow had sent prices soaring.

“We have been actively communicating, the president and myself, about the true cause of this crisis: it is Russian aggression, not sanctions,” Ukraine’s Foreign Minister Dmytro Kuleba said.

Moscow’s war against its pro-Western neighbor has not only devastated crops and farming but also disrupted crucial deliveries from Ukraine — one of the world’s main grain producers.

Both sides accuse one another of destroying agricultural areas, which could worsen global food shortages.

“As far as we know, there is much less grain than the Ukrainians say. There is no need to exaggerate the importance of these grain reserves,” he told reporters.

The war’s economic impact continued to reverberate, with the World Bank cutting its global growth estimate to 2.9 percent — 1.2 percentage points below the January forecast — due largely to the invasion.

Severodonetsk appeared close to being captured just days ago but Ukrainian forces launched counterattacks and managed to hold out, despite warnings they were outnumbered by superior forces.

Lanny Davis, a US lawyer for Ukrainian tycoon Dmytro Firtash, said 800 civilians had taken refuge in the bunkers inside his huge Azot chemical plant in the city.

The situation was also increasingly desperate in Lysychansk.

“Every day there are bombings and every day something burns. A house, a flat… And there is nobody to help me,” 70-year-old Yuriy Krasnikov told AFP.

“I tried to go to the city authorities, but nobody’s there, everyone has run away.”

Ivan Sosnin was among those residents who decided to stay despite the war.