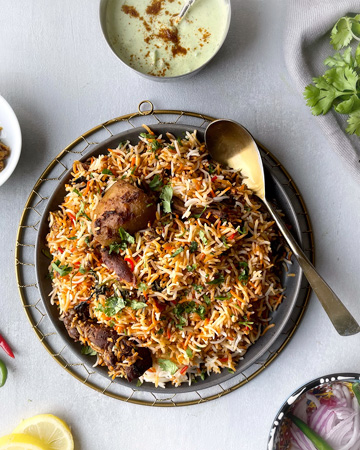 Pakistani singer Aima Baig has professed her love for the much-famed Karachi spicy biryani, saying that she is particularly fond of this spicy delicacy food. In a candid conversation with SAMAA TV, the singer revealed the secrets of her good health and talked about her upcoming projects and global recognition.

Talking about her food preferences, Baig said she is a “foodie,” who loves spicy foods.

“I like spicy food but not crazy spicy that makes me dizzy,” Baig said.

Spilling the beans on her diet to stay healthy, Baig said she particularly likes vegetable and avoid meat. Baig also talked about the start of her musical career and her first project with Pakistan Army’s media wing Inter-services Public Relations (ISPR).

“The first [project] I did was a song for ISPR called Nanhay Haathon Mein Qalam after the APS attack,” she said. Baig said she currently has her hands full as she is working on a number of projects.

“I will release an EP, a new single and a few collaborations,” she said without divulging any more details due to confidentially.

However, she claimed that her upcoming projects would be “different from the work she has done till now.”