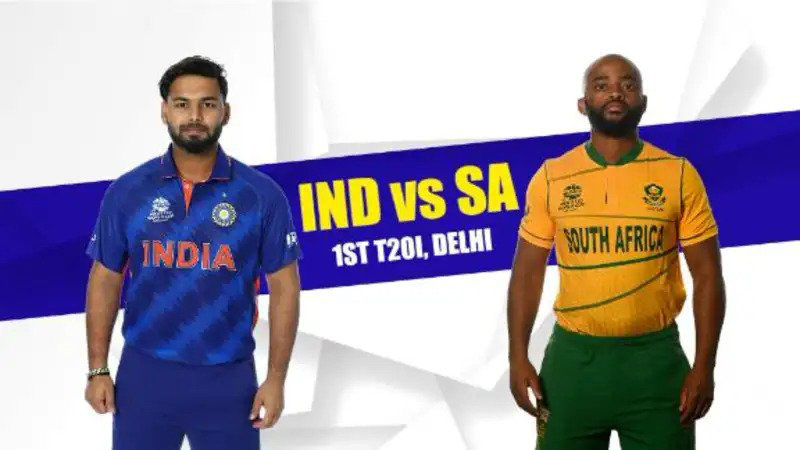 NEW DELHI: Its T-minus 130 days to the start of the T20 World Cup but it seems only one of these two sides has seriously started the countdown, and it’s not India. They’ve chosen to rest new captain Rohit Sharma, former captain Virat Kohli, and pace spearhead Jasprit Bumrah for the five match-series against South Africa, who have selected their strongest suit despite some suggestions they may not. Now KL Rahul and Kuldeep Yadav are lost to injury as well. Test captain Dean Elgar hinted that the players who chose to go the IPL instead of staying at home for the Bangladesh Tests should not expect the doors to be thrown back open but that’s exactly what happened. All of them — except Faf du Plessis and Dewald Brevis – have been included in this squad, which is headlined by a first-choice pace pack. Kagiso Rabada, Lungi Ngidi, Marco Jansen and fit-again Anrich Nortje are all available, while allrounders Dwaine Pretorius and Wayne Parnell take South Africa’s seam options to six.

That could set up one of the contests of the series, between the quicks and Dinesh Karthik, who is making an international comeback after more than three years’ absence. Perhaps the more intriguing match-ups will come from seeing how those who worked well together at the IPL — Hardik Pandya and David Miller, Kagiso Rabada and Arshdeep Singh — will fare against each other now that national rivalries have resumed. But most interestingly, this will be the first series played in India without Covid-19 related restrictions, which several players said impacted their mental health.

Players can move in and out of hotels and stadia, and matches will be played at five different venues around the country, with full attendance allowed. More than 100,000 people turned out to watch the IPL final, and there’s an appetite for gathering once more so for both teams, this could be the series that not only marks the start of World Cup preparations but also the start of things going back to the normal.

After leading Gujarat Titans to the IPL trophy, all eyes will be on newly-minted vice-captain Hardik Pandya, both in terms of where he bats and how much he bowls. At Titans, Hardik was used at No. 4, with great success. He averaged 44.27 and scored four fifties in the season. For India, he has only batted in that position four times in 54 matches. With Kohli and Suryakumar Yadav absent from this squad, the door could open for Hardik to bat higher but that could leave India one finisher light. His bowling will also be key. Hardik averaged two overs a match at the IPL, which India will hope proves enough for them too, as he continues to manage a long-standing back issue.

David Miller was part of Hardik’s champion team and also found himself in a different batting position. Miller was used at No. 5 for Titans, but usually finds himself at No. 6 for South Africa, often with too little time to make the kind of impact that he did at the IPL. It would seem there’s an easy solution for that and South Africa could just move Miller a spot higher but theirs is a squad stacked with top-order options and a dearth of finishers and fitting them all in could prove tricky. Miller may find himself competing for time in the middle with Aiden Markram, Rassie van der Dussen or newcomer Tristan Stubbs, but will hope his experience means he can pull rank.

With Rahul, the stand-in captain and first-choice opener, sidelined, India will be led by Rishabh Pant and, in all likelihood, have Ruturaj Gaikwad at the top of the order. Meanwhile, international cricket may have to wait to see IPL sensations Umran Malik, who finished fourth on the overall wicket-takers’ list and topped 150kph at will, and Arshdeep Singh, who proved himself at the death. Despite their breakthrough seasons at the T20 showpiece, India’s coach Rahul Dravid hinted they would have bide their time for now, with Bhuveshwar Kumar, Avesh Khan, Harshal Patel and Hardik set to do the seam-bowling duties. If Hardik goes back to the finisher’s spot at No. 6, it may create room for Karthik in the top five. He would have to displace Deepak Hooda.

South Africa are likely to retain the top four through most of the 2021 T20 World Cup, which means there could only be room for two out of van der Dussen, Miller, Heinrich Klaasen and Stubbs. Pretorius is the preferred allrounder, over Parnell, but South Africa could still have a left-arm pace option in Jansen. Nortje’s return means South Africa may find themselves choosing between Jansen and Lungi Ngidi for the third seamer spot and both may miss out if they opt for two spinners.