Imran to announce date for Azadi March in ‘a few days’

* Ex-PM claims PTI protest will be 'the biggest' in country's history
* India, Israel and some Western countries to benefit from PTI govt's removal 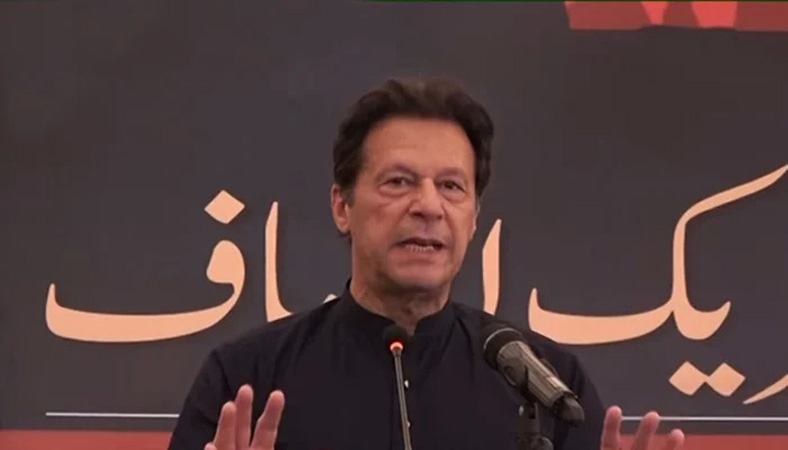 Former prime minister and PTI Chairman Imran Khan Wednesday said his party will announce the date for the second phase of ‘Haqeeqi Azadi March” in a few days after getting clearance from the Supreme Court.

“It will be the biggest protest in Pakistan’s history. I am asking you to remain prepared as once we get clearance from the Supreme Court, I will give you the date,” he said while addressing PTI’s national council meeting in Islamabad.

He urged his party workers that what they were doing was not politics but ‘jihad’. “We will take this country to real freedom and democracy,” the former premier said.

Noting that his party had an additional responsibility being the “only federal party” in Pakistan, Imran Khan said that PPP and PML-N had become regional parties with the former ruling interior Sindh and the latter just one province.

He said preparations were being made to make the current government win the next elections, says a news report.

“No one has faith in the ECP. Police officials and bureaucrats fear them. Even institutions fear them. They are trying to appoint their own people in different institutions.”

Khan said the only reason the current regime came into power was to remove all the cases against them, not because they were sympathetic to the people.

“They say country is in bad shape but the same people ruled this country for 30 years and only moved the country to the point of destruction,” he added.

Imran said the PTI government launched 10 dam projects after 50 years including two big ones, adding that all these projects would not face difficulties as it would be hard to get loans for them.

“Moody’s has given them a negative rating. WAPDA’s credit rating is also negative after Muzammil’s resignation. In future, we will also have water shortage issues. All the development projects would be jeopardized because we will not get loans,” he added. Imran said during the tenure of his party’s government, the country’s GDP was growing at a rate of 6 percent and the growth rate was projected to reach 7 per cent.

Lashing out at the government for making the life of all Pakistanis miserable, he said the country had never witnessed such inflation, as it did during these two months.

“During our three-and-a-half-year tenure, we increased petrol price by Rs55 and diesel by Rs50 but the current government raised the price more than that during these two months.”

The former premier said that the current government will never buy oil from Russia as it will annoy their masters – the United States.

“They can never take a stand because they have billions of dollars stashed in foreign countries… they know the US will do to them what it did to Russian oligarchs.” He said the US conducted 400 drone attacks in Pakistan but the same rulers did not even condemn them once.

He said that India, Israel and some Western countries were the happiest after he was removed from power. “They are happy that Shehbaz is now prime minister because now their agenda will be followed, not what is in the interest of Pakistan,” he added.

Imran Khan further said that the agenda of Pakistan’s enemies is to disintegrate Pakistan into many pieces. “Indian analysts on their media openly say this. Those who brought them here want them to serve accordingly,” he further said.

Imran said the ruling coalition government would not dare take any step without “permission” of the United States. He also castigated the government for the rise in inflation.

When we were in power, they cried themselves hoarse talking about inflation but compare their two months and our three-and-a-half years, he said.

“This means that inflation was not the cause [behind ousting the PTI government]. If it was, then they would not have done this. They had a different objective which has now been revealed,” he said, adding that the current rulers only wanted an end to the corruption cases registered against them.

He questioned why the government had not approached Russia to ink an agreement for supplying cheap oil.

Talking about his visit to Russia as the premier, he said the PTI government had negotiated a deal for cheap oil.

“When we came back, they tabled the no-confidence motion which caused things to slow down.”

Imran said if the government actually cared about inflation, it would have pursued cheap oil from Russia without any delay.

“Their finance minister says Russia should come to us and make an offer […]. The truth is they will never do anything without America’s permission.”

He highlighted how India was buying cheap oil in order to provide relief to its people. “If they (government) cared about the people, then their first priority would have been to pursue this.”

“Look at the direction our country is heading. Who is benefitting from this?” he asked. He answered his question by saying those forces that wanted to harm and divide the country.

He alleged that foreign forces brought the current government into power as they did not want to see the country strengthened. “That is why this is a very important time for you,” he told the gathering.

Imran said that the PTI was the only party that could keep the country together, adding that enemy forces wanted to weaken the party and the army. “The forces that were against us are ecstatic that Shehbaz Sharif is in power.”