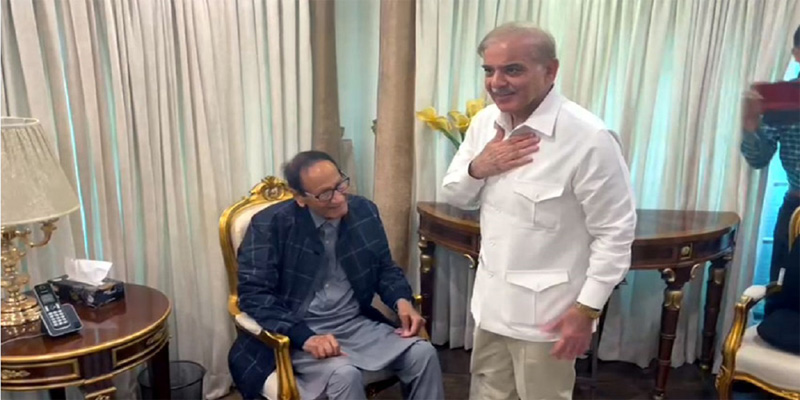 A private TV channel reported that Chaudhry Shujaat is in favor of joining PML-N while Pervaiz Elahi has pinned his hopes on PTI. The report said that Senator Kamil Ali Agha’s efforts to bring reconciliation among the Chaudhry brothers couldn’t bear fruit. The TV channel reported that Chaudhry Shujaat’s son and fellow leaders will be supporting PML-N in the future political scenario. However, Monis Elahi is in favor of supporting former prime minister Imran Khan and he has also persuaded Chaudhry Parvaiz Elahi and others in this regard.

It is worth mentioning here that Chaudhry Shujaat’s son Salik Hussain and PML-Q’s Tariq Bashir Cheema are in Shahbaz Sharif’s cabinet. While, Ch Pervaiz Elahi has contested for Punjab CM’s slot as a candidate of the PTI.

On the occasion, Chaudhry Shujaat presented certain suggestions regarding overseas Pakistanis and the upcoming fiscal budget. The prime minister welcomed these proposals, which, he said, were public oriented and would be made a part of the budget. He told Ch Shujaat that two federal ministers from PML-Q are very hard working and honest, the PM Office Media Wing said in a press release.

In another interesting development, Chaudhry Wajahat Hussain’s son Hussain Ellahi announced on Wednesday that he is parting ways with PML-Q over the support offered by the party to the Shehbaz Sharif-led “imported government”.

“I’ve always said my country is first for me and keeping that in mind I have decided that my political journey with PML-Q must come to an end,” tweeted Hussain.

Hussain is the son of Chaudhry Wajahat Hussain, who is the brother of PML-Q President Chaudhry Shujaat Hussain. The MNA elected from Gujrat, shared that he will be deciding his future with Moonis Elahi, the son of Punjab Assembly Speaker Pervaiz Elahi. He added that he cannot be in a party that supports the Shehbaz Sharif-led “imported government”.

Although the party has time and again claimed that this is not the case and that they were on the same page, Hussain’s labelling of the ruling parties’ coalition as an “imported government” suggests otherwise.

Not only this, Moonis has retweeted a report by a private TV channel claiming that fissures within the PML-Q had come out in the open. The report states that one section of the party backs the PTI, while the other is in support of the PML-N.