SHC allows Dua Zahra to decide her own fate 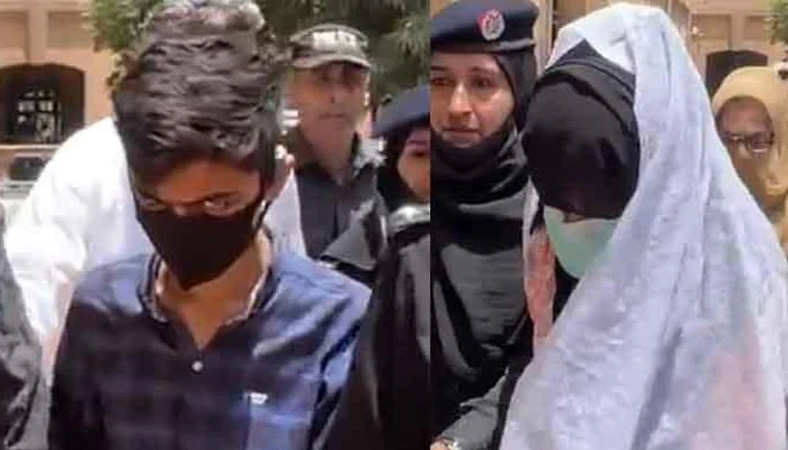 The Sindh High Court (SHC) Wednesday allowed teenager Dua Zahra – who had mysteriously gone missing from Karachi in April but later declared that she had run away from her home to marry 21-year-old Zaheer Ahmed – to decide where she wants to go, with her parents or husband.

In a three-page written order, Justice Junaid Ghaffar said the court reached the verdict in line with the testimonies. “In light of all the evidence, this is not a case of kidnapping.” “…the alleged/minor Dua e Zahra Kazmi, pursuant to her statement on Oath and Age Certificate is set at liberty to decide as to whom she intends to reside and go along,” the order read. In the order, the court also said that it has decided to dispose of Zahra’s father’s – Mehdi Ali Kazmi – petition for her recovery as the case of his daughter was not of kidnapping.

For the production of Dua before the Lahore High Court later this week, the SHC said the Sindh Police is at liberty to produce her if required. But the judge said that “we, after production and statement of the alleged abductee Dua, are not inclined to issue any further directions to that effect.” During the hearing earlier in the day, the high court had allowed the parents to meet their daughter for 10 minutes, after reserving its decision on the teenager’s recovery plea. Besides the parents, the girl’s maternal aunt was also part of the meeting that took place in the court chambers.

However, after the meeting, the girl’s father, Mehdi Ali Kazmi, reached up to the judge’s rostrum and claimed that the girl in the private meeting had said that she wanted to go home. The court questioned his statements and maintained that Dua Zehra had signed an affidavit before the court saying that she did not want to go with her parents.

“Despite the affidavit, you are asking us to issue another order,” the court remarked. Dua Zehra’s father reiterated his claim, much to the chagrin and disbelief of the high court.

According to judicial sources, the parents’ claim was false. Apparently the parents had kept begging Dua to go home with them but she sat quiet, and did not even look at her parents. They further cited the girl’s refusal to converse with her parents as a reason for the meeting to end before a full 10 minutes.

Talking to the media after the hearing, provincial minister Shehla Raza said when the girl had appeared before the court, there was an order to undergo medical examination to determine her age. “We have objected to the girl’s medical report,” she added. The minister said that the police surgeon was asked for an age certificate, but the certificate does not even have the police surgeon’s signature. Shehla added that the signature on medical certificate is not of Dua Zehra, it is someone else’s. “The teeth have been declared to be of a minor in the certificate,” the minister claimed. “I have met the girl. She cannot go alone,” Shehla said, adding that the girl had at the last hearing said that she did not want to go with her parents. However, she added that Dua did say that she wanted to go with them. “But was not allowed to go,” the minister claimed.

In a separate petition, the Lahore High Court (LHC) raised objection on a petition of Dua Zehra’s father regarding a harassment petition filed by the girl’s mother-in-law. The father of Dua Zehra – a teen who was allegedly kidnapped and married – had filed a petition in the high court requesting it to reject the mother-in-law’s petition. The petition maintained that Dua Zehra had been presented before the Sindh High Court (SHC), therefore the petition filed in the LHC had become inactive and that there was no justification in presenting Dua before the LHC. The petition requested that the court reject the mother-in-law’s pending petition. Dua Zehra’s mother-in-law, Noor Bibi’s, request regarding harassment by the police is currently under hearing.