When reading and fun go together

* Born and raised in Karachi, Maheen began writing at an early age 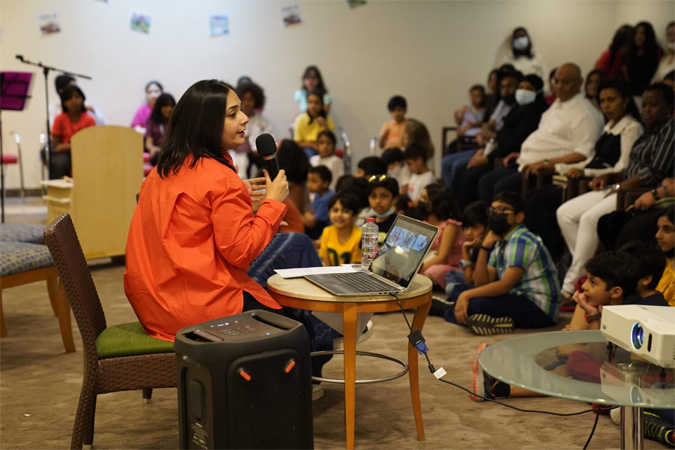 The Magical World of Children’s Literature was recently hosted by the Tennis & Country Club Fujairah.

It became a moment of fun and excitement when children performed skits and sang melodious tunes. Maheen Zeeshan, the author of the Talha and Aminah Tales, was the guest. The objective of the event was to promote children’s literature.

Born and raised in Karachi, Maheen began writing at an early age. She ventured into the art of storytelling as a part of in-house language classes in 2010 when she moved to South Korea after marriage. When asked about her inspiration to write, she said that it surfaced when she moved to Qatar where she began teaching students in grade one. She got to know about ‘Biff, Chip and Kipper stories’, which led her to create her protagonists, Talha and Aminah. Maheen, who moved to Fujairah, UAE, in 2016, published the first title of Talha and Aminah tales in 2017.

The moderator of the The Magical World of Children’s Literature was Elisaiah, an eighth-grade student at the GEMS Winchester School. Danillo played the piano and directed the songs for the show. Interestingly, Maheen has based all the stories of Talha and Aminah Tales on her children; Talha who is 11 and Aminah who is 10. When asked about her story writing process, she said, “Talha and Aminah shared many stories with her after they returned from school whether it was a trip to a Fire Station or a park. I used to write them down.” Talha and Aminah Tales are a series of books that children and parents read together. It helps children to explore the world around them and serves as an opportunity on dealing with the anxiety that children feel when visiting new places.

When asked about her vision to write these books, Maheen said, “Through my books, I want to give valuable lessons to children in a fun way. These lessons include the importance of using a garbage bin, how to overcome your fears, and the significance of family bonding. These stories will enhance the children’s imagination.

Maheen further added that role playing with songs is the best way to get the attention of children. They enjoy such activities, take part in skits and are eager to read the books. Such activities are highly recommended. She looks forward to such events taking place in Karachi more regularly.

Where Maheen’s storytelling prowess helped her connect with the children, it was the children who added excitement to the show through their performances. They presented a skit on Maheen’s story “A Visit to the Doctor” and sang “Muddy Puddles,” “Dentist Song” and “You’ve Got a Friend in Me.”

Tia’s outstanding performance of playing the violin and Danillo’s piano skills received a round of applause. Certificates were awarded to Zaya, Mustafa, Tia, Mekaydesh, Manal, Rahim, Aminah, Talha, Sara Bachelet, Sara Ali, Menaal, and Haris Munir for amazing performances. Maheen created Talha and Aminah tales to share real-life stories with children. “Today’s children are more realistic, and they do not need princesses, knights, or superheroes, they like to see characters like themselves who can treat patients, be an inventor, pilot the skies, or captain a ship,” Maheen added. During the event, Maheen shared with children tips on how to write a storybook and suggested to parents the importance of having a book reading corner in their homes and of bedtime reading.