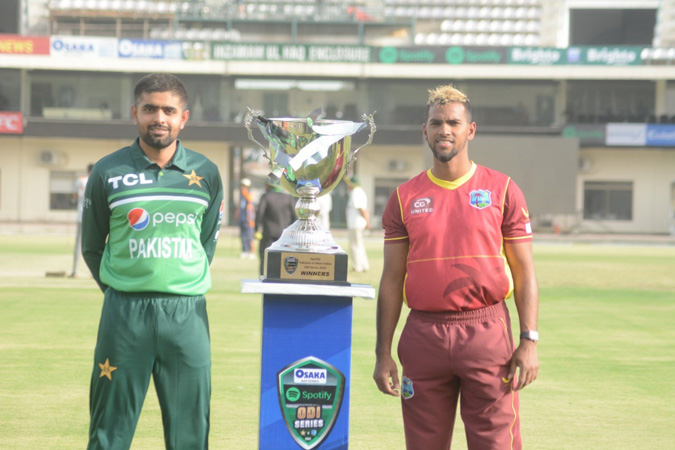 LAHORE: Skipper Babar Azam and his charges will be facing extreme heat when the three-match one-day international series against the visiting West Indies begins at Multan Cricket Stadium in Multan on Wednesday (today). The series, initially slated to be played in December 2021, had to be postponed due to a Covid-19 outbreak in the West Indies camp. The series carries significance as it is part of the World Cup Super League, which is why the selectors refrained from tinkering with a settled combination. The temperature in Multan is expected to touch 45 degrees centigrade during the day, and despite the matches starting at 4:00 pm, is unlikely to give players much respite. The Pakistan Cricket Board (PCB) decided to relocate the series from Rawalpindi to Multan in light of political uncertainty in the federal capital. The fixtures and schedule, however, remain unchanged, with the three ODIs, which are a part of the Cricket World Cup Super League to be played on June 8, 10 and 12. The games were originally slated for Rawalpindi, but the PCB had kept Multan as a back-up option.

It is interesting to note that Multan remained the only viable option, with Lahore and Karachi’s pitches being re-laid, and the Arbab Niaz Stadium in Peshawar undergoing renovation work. Pakistan has never hosted elite cricket at this time of year due to the summer heat, with nearly all high-level competitions including domestic season played during the winter and spring months between September and April. During the summer months, the PCB has mostly held its training camps in northern side of the country mostly in Abbottabad, which is located in the hilly Khyber Pakhtunkhwa Province and experiences relatively milder weather. Last year, the PCB had made an attempt to host women cricketers’ camp in Multan but had to call off the camp due to extreme heat.

Babar understands that weather conditions during the ODI series against West Indies will be challenging but he is confident of his side acclimating to the heat. Babar agreed that playing the matches in sweltering conditions was not ideal but was confident the players were well-prepared to deal with the heat. “Unfortunately the series could not be completed earlier in the original slot (in December),” Babar told reporters. “Obviously both boards have had their discussions and decided about this series on agreement. It’s a challenging scenario but now it has been decided and we are prepared for it. Definitely it is hot, but we started our training camp earlier in the day from 2:30pm so that we could feel the heat and get ourselves ready for the matches,” he added. The PCB has been assisting its team to counter the heat in Multan. The board has provided ice collars, vests, and extra water breaks to keep the players hydrated. While Babar conceded that it may take the visitors a little time to get used to the extreme heat, he expected West Indies put up a proper fight.

Pakistan recently beat Australia 2-1 in an ODI series at home, and had also blanked West Indies 3-0 in the three-match T20I series back in December, last year. On the upcoming games against West Indies, Babar said: “As a team, as a captain, you go into the series thinking about a clean sweep, whoever the opponent is. We went with the same thought against Australia, to play tough cricket and dominate. The intent is the same against West Indies, but it’s not like we are underestimating them. They also have the capacity to give you a tough time as on the day, they are a dangerous team. You can’t take them easy.”

Saqlain upbeat about Pakistan’s chances: The prevailing hot weather conditions in Multan aren’t a concern for head coach Saqlain Mushtaq. Instead, the Pakistan head coach is eyeing a clean sweep of the West Indies. “The West Indies are coming with full preparations,” the former off-spinner told reporters. “However, we are working on our different plans and we will try to win it 3-0. The players have worked very hard and are implementing the plans prepared by the team management. Of course, the weather in Multan is very hot but the training methods have been devised keeping that in mind. Professional players have to deal with all kinds of weather conditions.” Saqlain has been at the helm since last year’s Twenty20 World Cup in the UAE, where Pakistan were losing semi-finalists.

History of international cricket at MCS: The international cricket is returning to the City of Saints – Multan – after more than 14 years. The MCS has been host to some memorable contests since it first staged an international match in 2001 when Pakistan defeated Bangladesh by an innings and 264 run in a Test that began on 29 August. The three ODIs between Pakistan and the West Indies promise to add more to the legacy of the iconic venue. When Nicholas Pooran leads his men out on the field today, it will mark the second instance of a West Indies side taking the field at the MCS in ODIs. The two sides last played at the MCS on 13 December 2006 with Marlon Samuels’ breezy 100 not out off 99 balls securing a seven-wicket win for the tourists. The picturesque stadium has hosted seven ODIs with Pakistan winning four. In its inaugural ODI, Pakistan defeated Bangladesh by 137 runs in September 2003. The MCS has also hosted five Tests from August 2001 till November 2006. Of the four Tests to have ended in results, Pakistan have won three. Pakistan defeated Bangladesh twice in August 2001 and September 2003, and England in November 2005, while India have won the only Test to be played here between the two sides. The last Test at the stadium – between Pakistan and the West Indies – ended in a draw. The MCS, boasting a capacity of 35,000, is located off Vehari Road, in the suburbs of Multan. The stadium plays host to country’s top-level domestic cricket regularly. The most recent high-profile cricket matches here were the three Pakistan Super League matches in February 2020.