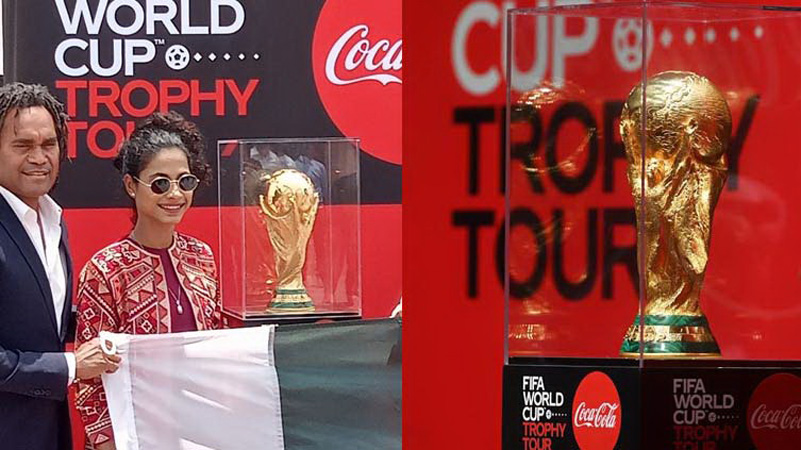 LAHORE: The glittering trophy of the FIFA World Cup 2022 has finally arrived in Pakistan as part of the FIFA Trophy Tour 2022. This is the second time in four years that the souvenir has been brought to Pakistan for football enthusiasts to see. Former FIFA Cup winner from France Christian Karembeu stepped out, carrying the trophy weighing 6.1kg, from a chartered plane that flew to Lahore from Uzbekistan. Pakistan’s women football icon Hajra Khan received the trophy at Lahore airport and welcomed it to Pakistan, where it will stay for one day.

The FIFA World Cup Trophy Tour is taking the one-of-a-kind, solid-gold FIFA World Cup Trophy to football fans in countries around the world. It is an international roadshow to let the fans enjoy a rare, close-up view of world football’s greatest prize. The trophy will be displayed at two different events in Lahore-one is for stakeholders and partners and the other is for the general public, which will be a concert to be held this evening.

Karembeu said that it was a privilege for him to be back in Pakistan again with the FIFA World Cup Trophy. “Every kid in the world wants to see [the trophy] and, of course, we need to respect that dream and we know that everything is magical when we have it (9 trophy) this close to us.” Karembeu said. Recalling his previous experience of being in Pakistan, the former footballer said that he was amazed to see the enthusiasm of football fans in Pakistan and it was a pleasant experience. He thanked Pakistan for a warm welcome again. “Four years ago, it was one of my best memories. I remember that 15 thousand people came to see the trophy,” he said, adding that seeing such a huge number wasn’t a shock but a pleasure.

“Here is the will to play football and I hope soon there will be a solution for them Pakistanis to play and be part of the competition.” Talking about the tournament, Karembeu said France is one of his favourites and he named Brazil and Germany as possible other teams in the top four. He said that an Asian or African team could also be there. Speaking at the occasion, Hajra Khan said that it was an honour for her to be part of the trophy tour once again. She hoped that Pakistan would soon make an early return to the international football arena.