Soha Ali Khan and husband Kunal Kemmu share parenting hacks: ‘In marriage or in any parenting situation, everything is a phase…’ 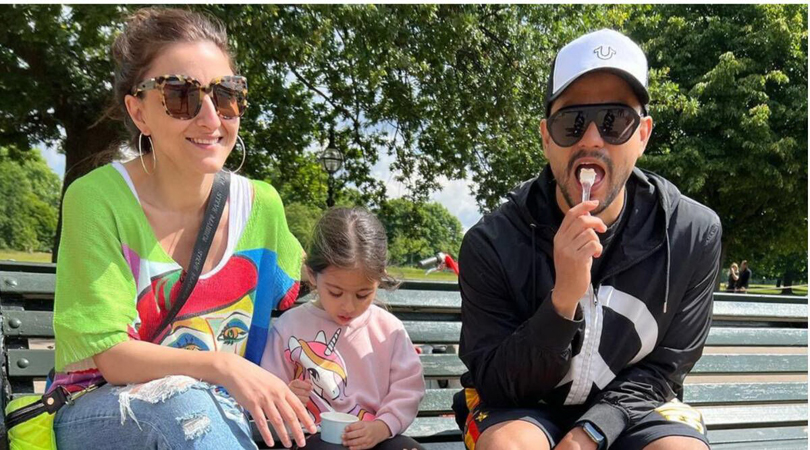 Soha Ali Khan and Kunal Kemmu have been featured in a new video on the Tweak India channel, discussing their experiences of parenting their daughter Inaaya Naumi Kemmu. They also shared some parenting hacks with viewers. In the video, Soha and Kunal emphasised on rule number one in parenting, which is: “You really have to try and listen to your child.”

When the couple was asked a few questions, like who among the two of them is more likely to discipline their daughter, Soha said it would be her. However, when they were asked who out of the two likes to dress Inaaya up and do her hair, both of them said it would be Kunal. He also said that he’s the one who spoils her by giving her chocolates, for which he “gets scolded” by Soha.

Kunal shared how he believes children should be taught new concepts. He said, “Any concept that you tell them in a way that you’re trying to teach them something, there is a lesser chance of them doing it. You have to kind of make it a part of your lifestyle, and ease it into them and their lifestyle.”

Soha then shared how Inaaya did not like walking on grass as she had never experienced it. The two of them had to introduce her to open spaces, parks and gardens for her sensory growth. Soha said, “She wasn’t used to that sensation, as she was born in a modern flat. A lot of nature can be unnatural to children of our generation, so you have to expose them to things like the ocean, water, forests, etc.”

Soha also shared how she believes that free play is important for kids. She said, “Free paly is also important. And luckily now when the lockdown is eased and Covid restrictions have eased, we are going to school, they are going on play dates, they meet each other. So, even if you leave her and her friends alone in a room, they engage themselves, imagine and pretend play. The idea is not to restrict their imagination and also not overwhelm them with too many options.”

Soha then shared how she is guilty of chalking out her daughter’s entire week. She said, “Parents can also be too structured and I am guilty of chalking out her entire week, whether it is her diet, or play dates. Sometimes she says she just wants to play, and I have to be sensitive to that.” Kunal added, “We are such a generation where we would listen to our parents but they wouldn’t listen to us, now we have to listen to our children and we feel like my generation got screwed in the middle because we never got to be the boss.”

Soha and Kunal also spoke about how they introduced a pet in their family, and how they have taught Inaaya to ask for permission before she touches anybody’s pet. They also emphasised on the need for children to know more about animals and learn from them. Soha and Kunal, who have imbibed values of empathy and love in their daughter, also spoke about how important it is for a child’s emotional growth to be humble, and that they continue to live a life where Inaaya can watch and learn.

Soha shared anecdotes about how she learned certain things from her father, Mansoor Ali Khan Pataudi. She said, “We have to teach our kids through example. I never ever heard my father raise his voice, so I understood that it wasn’t for you to raise your voice. He always spoke to people with respect and that’s how I learned that we are supposed to talk to people respectfully. You have to try and be a good role model for your child, but if you slip up and apologise for it, that’s also okay because we’re all human.”

“We all have to remember that in marriage or in any parenting situation that everything is a phase, and that phase will be over and a new phase will start. So, certainly for me, when I was very obsessed with being a mother, I wanted everything to be by the book, and I wanted to be in control of everything. now I feel I have achieved a balance in life… It is important to be flexible and fluid.

Soha and Kunal then spoke about their children’s book, Inni and Bobo Find Each Other: Inni and Bobo Adventures (Book 1), which Kareena Kapoor Khan and Saif Ali Khan were seen promoting in May.