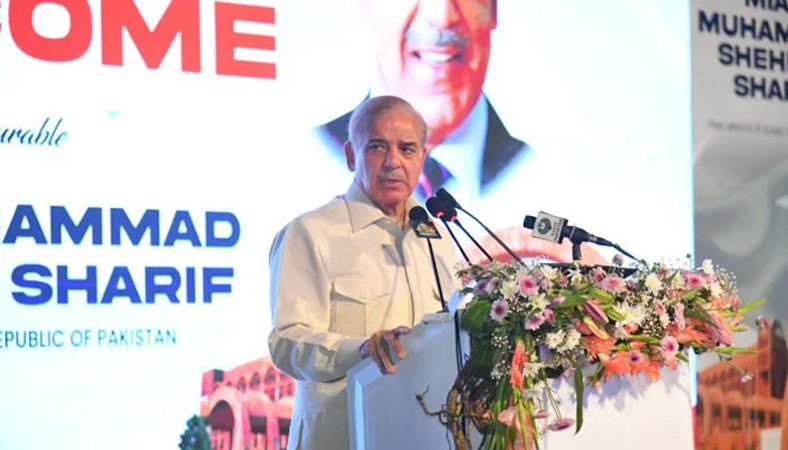 Prime Minister Shehbaz Sharif Sunday emphasized the need for a ‘grand dialogue’ involving all stakeholders to steer the country out of problems stalling its march towards stability and prosperity.

Inaugurating the first phase of 600-beds at the Indus Hospital in Lahore, he said the current situation in the country was difficult but ‘soon the country will progress at a fast pace’. “We have to think beyond personal interest for the country’s progress and development,” he added.

He said all the stakeholders should think “above themselves and their personal like and dislike” and accord top priority to the progress and prosperity of the nation.

He said no one should have permission to do politics on health, agriculture etc. “You need to see the bigger picture, you will have to kill your ego for the nation’s prosperity,” he added. He lamented that he made the proposal “nearly four years ago but it was rejected. The premier said that the government had to raise petroleum prices with a heavy heart, as petrol prices had shot up all over the world, says a news report.

“However, a monthly subsidy worth Rs2,000 will be provided to millions belonging to the low-income segments of society,” the premier contended during his address at an inauguration ceremony at the Indus Hospital Lahore earlier today.

Shehbaz claimed that the former Pakistan Tehreek-e-Insaf (PTI) government had not raised petrol prices in time. He said that measures were being taken to decrease load shedding in the country, and that load shedding for more than two hours a day will not be permitted. Shehbaz said nations were not formed by building magnificent buildings, but hard work, integrity and sacrifices coupled with knowledge and the latest technology.

The prime minister maintained that a “country cannot survive on debt”. Comparing Pakistan’s export volume with Bangladesh, he said its annual exports now touched the $40 billion-mark while Pakistan’s was $27-28 billion annually.

He lamented that Pakistan should have been at the forefront of the Islamic world in terms of progress and development.

About load shedding, the premier said that he had chaired an emergency meeting on Saturday in which he ordered that a mechanism be developed to decrease its duration.

The prime minister said that he was ready to be held accountable for his two-and-a-half month rule, “but what about the previous rulers who had governed the country in the last three-and-a-half years?”.

He also lauded the contribution of Dr Amjad Saqib and said if good and generous people wanted to extend support to the government in the provision of relief to the masses in the health sector, they should be encouraged and not politically targeted.

The prime minister said his administration in Punjab had set up the PKLI hospital which he said became a “world-renowned hospital”, but the previous PTI government had “politicised it and caused immense damage”.

“The PTI government had destroyed all departments and entities,” he added.

He also appreciated Iqbal Kitchi, Mian Javed Bhatti, Mian Muhammad Ahsan and others for their donations which would be spent for serving humanity.

The prime minister said during his tenure as chief minister, he had activated Punjab Endowment Fund with deposit of 20 billion rupees and supported a large number of orphan children with its fund.

He also lauded the contribution of Dr Amjad Saqib and said if good and generous people wanted to extend support to the government in the provision of relief to the masses in the health sector, they could be encouraged and should not be politically targeted.

He regretted that the previous government had closed the endowment fund and CM self-employment scheme in the province and assured Dr. Amjad that such like schemes would be revived soon.

The prime minister said they had also set up PKLI hospital at worth Rs20 billion which became a world-renowned hospital, but the previous government of PTI had politicized it and caused immense damage. The PTI government had destroyed all departments and entities, he added.

Earlier, the prime minister took round of the different sections of the hospital and interacted with the staff and patients.