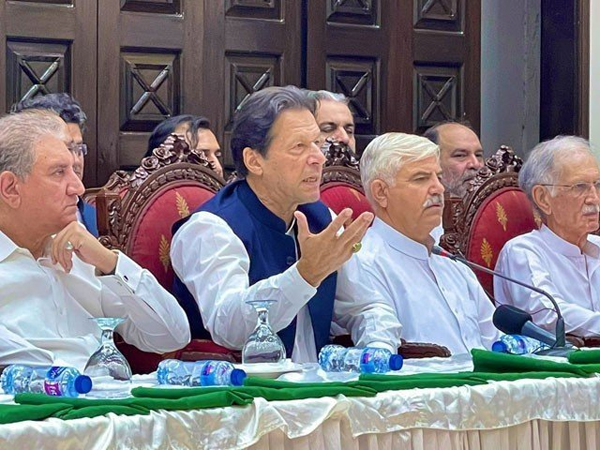 PTI’s core committee has decided to delay the date announcement of Azadi March phase-II till June 15. However, the party will stage nationwide protests at the district level against inflation. The PTI has canceled the plan for immediate long march due to the budget 2022-23.

The decision was taken during a meeting of the party’s core committee, presided over by former prime minister and PTI Chairman Imran Khan at Bani Gala.

The committee discussed the second phase of the movement, inflation and the political landscape of the country during the meeting. Senior party leaders also participated in the meeting and presented their recommendations to the ex-premier.

Speaking to the media after the meeting, former foreign minister and PTI leader Shah Mahmood Qureshi said that the core committee expressed reservations over the economic situation of the country. “The government increased the electricity tariff by Rs8 per unit, prices on petroleum products were also increased and now it is being said that cost of gas will also be raised,” he added. He said that a 20kg bag of flour in Punjab, which produces the bulk of wheat in the country, is being sold at Rs1,600, adding that the country was going to witness a sharp increase in prices of commodities soon. He feared that the inflation might even reach 25 to 30 per cent, saying that all four provinces were facing water shortages.

Qureshi said that the violence witnessed against PTI workers on May 25 had not been seen under the rule of any government before. “We will file cases against those SHOs who barged into the house of people and tortured them,” he added, urging the workers to point out such officers.

He said that the women workers were also tortured and they have decided to protest against the government in which members of parliament will also participate. “The protest will take place in Islamabad or Rawalpindi but its exact location will be revealed soon,” he added.

The former minister questioned when foreign interventions were taking place why certain quarters remained silent, adding that the “protectors of Pakistan” should have taken notice. “We believe in dialogue but this government has been imposed upon this nation and talks cannot take place with those who have been forced upon the masses,” he further said.

The core committee also finalized the strategy in case chairman Imran Khan gets arrested. The party would not engage in talks other than for the date of new elections in the country and its lawmakers would also not appear before the National Assembly speaker for verification of their resignations.

Qureshi said that Interior Minister Rana Sanaullah intends to arrest Imran Khan, adding that such action would see an ‘extreme reaction’. He urged the party activists to strongly react if Imran Khan gets arrested by the ‘imported government’ without waiting for any instruction from the party. Qureshi warned that those thinking there would be silence over Imran Khan’s arrest were mistaking.

He asked Pakistan People’s Party (PPP) to clear up its stance on the recent negotiation rounds between Pakistan and Tehrik-i-Taliban Pakistan (TTP), adding that these talks during PTI’s government were opposed widely.

He announced that PTI will actively participate in by-polls on 20 vacant seats in Punjab. He said that PTI core committee decided to organise a protest demonstration against the torture of women during PTI long march on May 25.

Qureshi said “some constituencies are divided in the new delimitations made by the Election Commission of Pakistan (ECP) and PTI will challenge ECP’s steps.”