Suhana, Khushi and team pose as they enjoy a sunny day in Ooty

* Interestingly, Suhana and Khushi took the social media by storm on Saturday as they shared some beautiful pics from Ooty as they enjoyed a sunny day amid the shoot 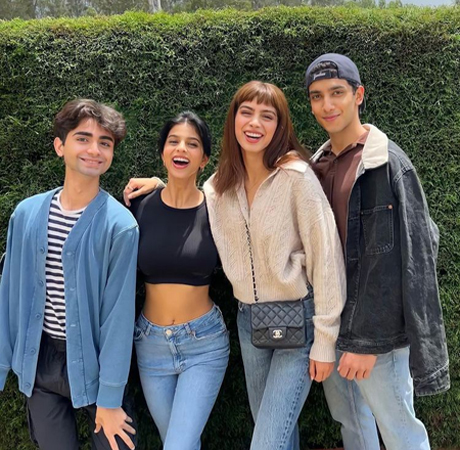 Shah Rukh Khan’s daughter Suhana Khan has been making the headlines of late as she is set to make her debut with Zoya Akhtar’s much talked about movie The Archies.

The movie happens to be the Bollywood adaptation of the popular comics and also stars Agastya Nanda, Khushi Kapoor, Vedang Raina, Mihir Ahuja, Yuvraj Menda and Dot in key roles. As the audience has been eagerly waiting to witness this Bollywood version of The Archies, the team is shooting for the much anticipated project in Ooty and treating the fans with sweet BTS pics.

Interestingly, Suhana and Khushi took the social media by storm on Saturday as they shared some beautiful pics from Ooty as they enjoyed a sunny day amid the shoot. In the pics, Suhana was a sight to behold in her black coloured crop top which she had paired with denims. The actress had tied her hair in a back bun and was all smiles for the camera. On the other hand, Khushi was flaunting her Betty look with her bangs as she soaked in the sun in Ooty. The ladies were seen posing with Yuvraj and Vedang.

Earlier, talking about The Archies, Zoya had stated that she is quite nervous about the project. “I’m currently shooting The Archies as a feature film and that hopefully will be out next year. The characters are iconic and globally loved, which is also why I am a little nervous. I have to make sure the film stokes the nostalgia of a generation that grew up on the comic, and yet resonates with young adults today,” Zoya was quoted saying to The Hindu.

The Archies is will be premiered on Netflix next year.

Earlier, when the makers had unveiled the first look of The Archies, several celebs had expressed their excitement about the new project. Amid this, Shah Rukh had also penned a piece of advice for Suhana and asked her to be herself. SRK asserted, “You have come a long way baby….but the road to people’s hearts is unending”. He also suggested Suhana to be kind and giving as an actor and make people smile with her performance.