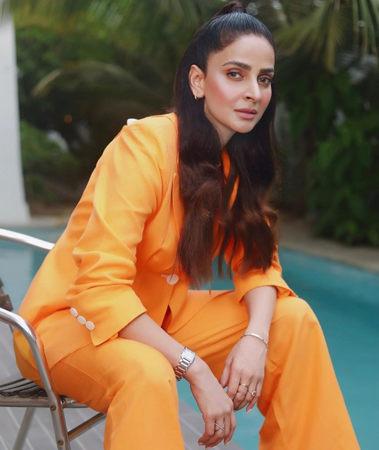 Lollywood diva Saba Qamar is making headlines with her back to back projects on both small and big screens – and the latest one is film Kamli. The 38-year-old actress recently faced indirect criticism from veteran actor Faysal Quraishi amid her ongoing television project Fraud. Quraishi shared a post carrying ageist comments after Saba Qamar’s drama was broadcast on television. “Bhai ager Isko 24 Saal Ki Hay drame main to Muje bi 27 Saal ka Banao,” Faysal Quraishi wrote without naming anyone. The Hindi Medium star reacted to Quraishi’s comments in a chit chat session with Galaxy Lollywood. Saba said, “I have great respect for Faysal as he is a brilliant actor” The Digest Writer star said that she took his opinion gracefully. “But what can I do Faysal, such are roles are still being offered to me,” she concluded.