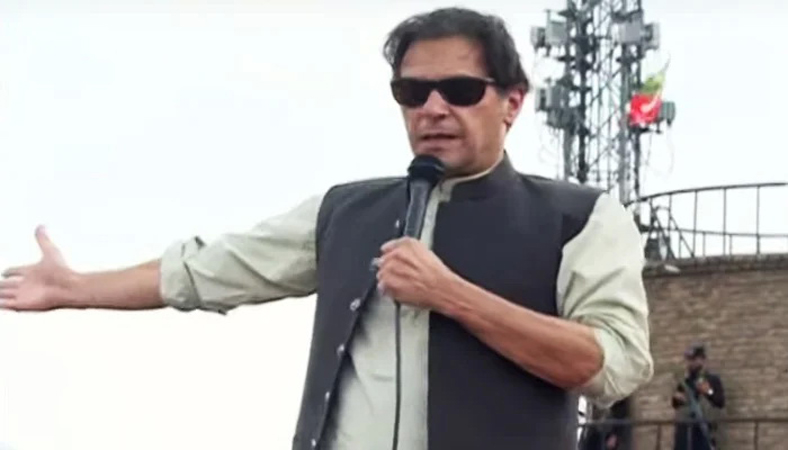 He addressed a public gathering in Dir Bala in Khyber Pakhtunkhwa (KP).

Imran Khan said his government was not toppled because of inflation, but the motive was to impose the ‘US puppets’.

“The past PML-N and PPP governments were ousted due to corruption but I ask why our government was toppled although Pakistan was going in the right trajectory.” Imran Khan said that Prime Minister Shehbaz Sharif looks perplexed these days and says he did not know that the landmines were laid.

I ask you a question Shehbaz Sharif, “Why did you hatch a conspiracy when you could not run the government? You blame me for the current situation of the country. . then you would have left me in power.”

“After polishing boot[s] and so good that you can see your face in it, take the responsibility now.”

“I challenge you [Shehbaz Sharif], fix the country now,” the former premier said.

PTI chairman said the prime minister should not dash to other countries for help and should fix everthing by itself now after coming into power through a conspiracy.

“We used to hear that Shehbaz Sharif does a lot of work.. but it is now evident that his work was only in the advertisements.”

He claimed that the PTI government ‘fixed’ a collapsing economy but the ‘imported government’ has brought it again to that point with depleting foreign reserves and a rising dollar rate.

Earlier, he said that they had planned to arrive in Dir Bala at 4:30pm but they got to know that the stadium was filled to the brim at 2:30pm which indicates that the people do not approve of the

Imran Kahn said a free, fair and transparent election was panacea of all the problems being faced by the country and only the people themselves should decide about their future through vote. He said the entire nation was ready for general election. He said no country could make progress unless the corrupt elite were held accountable. Those nations, who did not stand against evil forces, perished, he added.

He said the erstwhile Soviet Union was disintegrated due to economic destabilization. At the same time, he added, for a strong defence, a country should be economically strong.

Imran Khan said hike in the prices of essential items, besides increase in the petroleum products’ rates had made negative impacts on the common man.

During his government, he claimed, the Gross Domestic Product growth rate touched 6 percent, besides 75 percent increase in the IT (information technology) exports and substantial rise in the production of agricultural crops.

He said the Pakistan Tehreek-e-Insaf government also introduced the health cards scheme, under which the people of Khyber Pakhtunkhwa were availing free treatment of upto Rs one million per family.

Interest free loans were provided to the youth under the Kamyab Jawan Programme, he said, adding stipends were given to the students, while the Kifalat Programme under the Ehsaas initiative was also launched for the poor.

Imran Khan said as Pakistan was created in the name of Islam, all the problems being faced by it could be addressed by strictly adhering to the Islamic teachings.

He said Father of the Nation Quaid-e-Azam Muhammad Ali Jinnah had tirelessly worked for an Islamic welfare state where the people could get all facilities at their doorsteps. He asked KP Chief Minister Mahmood Khan to construct a big sports stadium in Dir. The public meeting was also addressed by the KP chief minister.