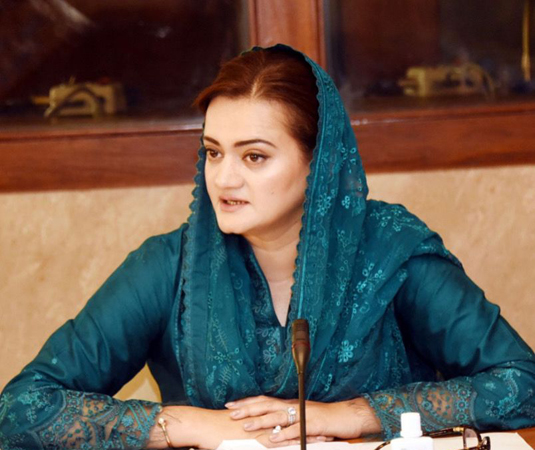 Minister Information and Broadcasting Marriyum on Saturday told Pakistan Tehreek-e-Insaf (PTI) Chairman Imran Khan to get a grip on his paranoia of being dominated by Prime Minister Shehbaz Sharif’s performance and take a backseat till 2023 elections.

In a statement, responding to Imran’s recent speech, Marriyum said Imran was fearing that if Prime Minister Shehbaz Sharif would continue working at the same pace, he would successfully bring down inflation and fix the national economy destroyed by Imran.

She said Imran was also scared of the fact that Shehbaz would revive diplomatic ties that Imran’s incompetence had turned sour and would successfully bring back foreign investment into the country.

By doing this, she added, PM Shehbaz would also ensure more employment opportunities for the youths of Pakistan.

The minister said after the death of his false narratives of accountability, Riyasat-e-Madina, and international conspiracy, Imran had now started ranting about the unity government’s 1.5 months performance.

His false narrative of foreign conspiracy was buried forever by the National Security Council that clearly dismissed it twice, she added.

“Imran needs to look at his image of inabilities, incompetence, corruption and and hypocrisy in the mirror, shut his mouth and wait to be rejected by the people in 2023. His meaningless rants that reek of fear and obsession of Nawaz Sharif that started in 2014 over the container, continued while he was in government, and are still continuing to this day and getting more meaningless and laughable,” she said.

Marriyum said Prime Minister Shehbaz was busy in putting out the fires of economic disasters that Imran and his government had started. Imran had no moral, principle or political grounds to question Shehbaz over 1.5 months, after obliterating the national economy over four years, she said.