* 'Kamli — A film that I hold very close to my heart, Hina a character that I ve lived is unrealistically beautiful, to be honest watching Hina on screen gave me goosebumps' 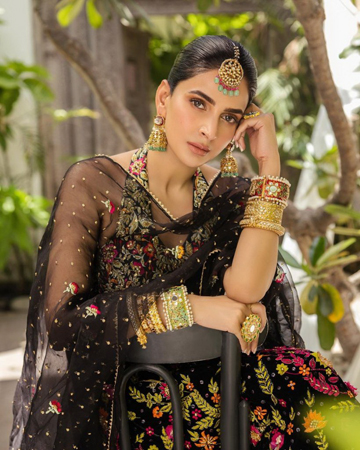 Pakistani actress Mahira Khan has recently commented on Sabar Qamar’s film “Kamli” and she said that she cannot wait to watch the film in theatres.

Saba took to her Instagram and penned a note about her upcoming film that how close this character is to her.

“Kamli- A film that I hold very close to my heart, Hina a character that I ve lived is unrealistically beautiful, to be honest watching Hina on screen gave me goosebumps throughout, the reason it made me so emotional is that it reminded me of all the hardwork and efforts to give this character a life and receiving appreciation for this made my heart so full,” Saba wrote on the post while sharing behind the scenes (BTS) video of her getting ready for the premier of “Kamli” in Karachi.

The “Lahore Se Aagay” star thanked the film’s director Sarmad Khoosat for casting her in the film, she said, “Sarmad Jee, my amazing mantooo jee I can t thank you enough for trusting me to play Hina, words would not be enough to describe how grateful I m to have gotten the opportunity to work with the legendary actors like Nimra and Sania Jee- I m still in Kamli I believe, Kamli is going to stay with me forever I guess.”

Saba also thanked her friends and Pakistani stars Mehwish Hayat and Bilal Ashraf for showing up on her premier and supporting her. Commenting under the post, Mahira wrote, “Can’t wait to watch it! I’m sure you are magnificent in it. Nothing less from Sarmad or you!”

While reacting on her comment, Saba said, “Thank you my love, this coming from you means a lot. Also, super excited to watch ‘Quaid-e-Azam Zindabaad’. Sending you lots and lots of luck and good vibes.” Several stars from the industry sent their wishes to Saba in the comment section on her Instagram posts regarding the film. “Kamli” is directed by Sarmad and features a star-studded cast which include veteran actresses Sania Saeed and Nimra Bucha while other actors like Hamza Khawaja, Adeel Afzal and Mehar bano, who will be seen in pivotal roles.

The film hit the theatres on Friday.