* PM admits pace of work in Gwadar has been 'slow' and 'unsatisfactory'
* Armed forces guarantors of peace and internal and external security
* 0.5m families from Balochistan to be included in BISP 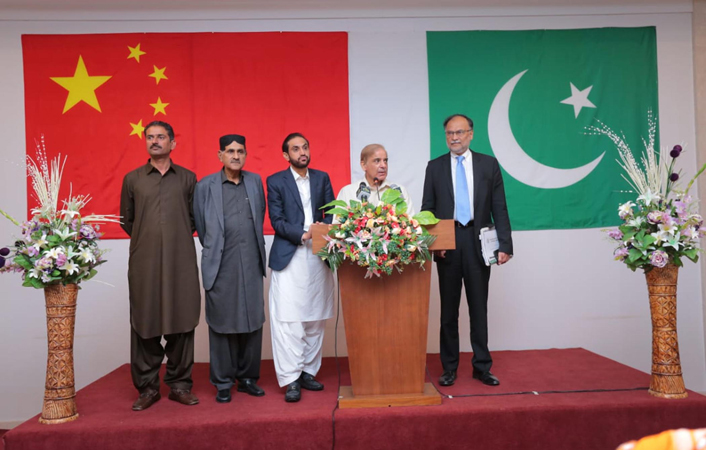 Prime Minister Shehbaz Sharif Friday said ousted premier and PTI chief Imran Khan had “set a trap” for his government by decreasing the prices of petroleum products after assessing that the no-confidence vote against him was going to succeed.

“Last night, the government increased the prices of petroleum products with a heavy heart,” Shehbaz said while addressing a ceremony concerning the inauguration of Gwadar East Bay Expressway.

Lashing out at the former government, the prime minister said it only provided relief to the people after realising that the vote of no-confidence was going to succeed. “They never provided subsidies on wheat and sugar, prices of which affect poor people the most,” he added.

Shehbaz said that his government tried to manage the petrol price initially but admitted that the government was in no position to continue the subsidies on petroleum products. “We have very limited gas reserves and most of them are depleting… we’re 98 percent dependent [from outside] to meet our energy needs,” he said while giving reasons for the price hike, adding that the government was forced to take the drastic measure as it had no other option.

The premier said that the government provided Rs2,000 relief to 80 million people. “This money can be used for any purpose i.e. to purchase petrol, wheat etc. We have not limited it to any one commodity,” he added.

Urging the elites to come forward and help out the poor to mitigate the effects of inflation, Shehbaz vowed that the government will take a lead and will also adopt austerity measures.

“I have called a meeting tomorrow. The austerity measures will be implemented on all government officials and it starts with me,” he added. He said that as a nation, we have to take these drastic steps so that Pakistan can be put back on track for prosperity and progress.

Talking about Gwadar and the multibillion-dollar China-Pakistan Economic Corridor (CPEC) project, Shehbaz said that the East Bay link will connect Gwadar to Karachi, adding that the government was aware of the needs of people living in the small port town. “For 3,200 families living here, China is providing solar panels. Our security agencies are providing excellent security to Chinese residing here as well,” he added.

He informed that many heavy ships cannot come to Gwadar port as it needed drilling in some locations. “The negligence from the former government halted the process. I have tasked Ahsan Iqbal to take this matter on war footing,” he added.

Shehbaz also announced including 0.5 million families from Balochistan in Benazir Income Support Programme (BISP) and added that all poor families from Gwadar will be covered under it. He said that the local fishermen in the city needed new boat engines, announcing that the government would give them 2,000 engines free of cost via balloting. He further said that funds for Gwadar University will be provided in the upcoming budget. Prime Minister Shehbaz Sharif said that the armed forces of Pakistan were the guarantors of peace, internal and external security, and regional stability, besides contributing to the global peace efforts.

The prime minister, while addressing the officers attending the Command and Staff Course at Command and Staff College here, paid rich tribute to the achievements and sacrifices of Pakistan armed forces. On arrival, he laid a wreath at the Shuhada Monument to pay homage to martyrs of Pakistan, according to ISPR. The prime minister said that Pakistan’s successes in war against terrorism were unparalleled and duly acknowledged by the world. He said the armed forces had always done a commendable job in service of the nation during natural calamities. The armed forces of Pakistan are very important state institution and are pride of the nation, he reiterated. Shehbaz Sharif said that the country’s defence was sacred and Pakistan’s security, sovereignty and integrity would be ensured at all costs. “The nation owes its freedom to monumental sacrifices of our heroes our martyrs, the prime minister remarked.