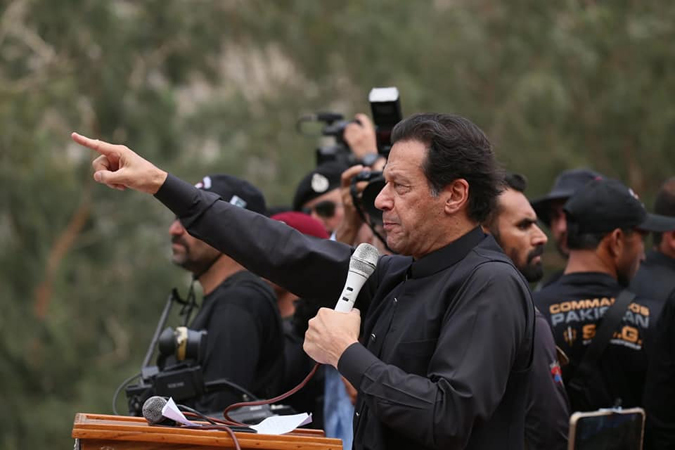 Ousted prime minister and PTI Chairman Imran Khan Friday claimed that his political opponents were plotting to get rid of him by filing a treason case to hide their corruption.

Addressing a rally in Buner district of KP, he said the main purpose of filing the treason case was to remove him from the way so that incumbent rulers could easily get relief in corruption cases.

“I want everyone to know that Zardari and Nawaz Sharif will prosecute me for treason and declare me a traitor. They don’t have any stakes here their everything is outside Pakistan,” he remarked.

“Can Asif Zardari and Nawaz Sharif file treason cases against me? All of their properties are in foreign countries,” he said and claimed that Zardari had sought the United States’ help against the Pakistan Army.

“And can Nawaz Sharif – who has bought four properties worth billions in London – decide whether I am a traitor?” Khan said, adding: “The only reason the government is against me is that they know once I am out of the way, it makes it easier for them to siphon the country’s money to foreign countries.”

The PTI chairman claimed the coalition government that the people were still backing him, therefore, they had now decided to file a sedition case. Criticizing PML-N Quaid Nawaz Sharif, Imran said the former never mentioned the name of Indian spy Kulbhushan Jadhav because “Sharif family has ties with the Indian business community”.

Criticizing the ‘neutrals’ – a tacit reference to the establishment – Imran said that took a very good decision to stay neutral “but national security is more important than staying neutral”.

On Supreme Court’s order to seek report from intelligence and law enforcement agencies on violence during PTI’s Azadi March, Imran urged the apex court to take input of civil rights organization as well to know the “real facts”. “We had staged a sit-in for 126 days which was peaceful. We would never want confrontation with the security forces of our country,” he added.

Imran also came down hard on the federal government for “bowing” to the demands of the International Monetary Fund (IMF) and increasing the prices of petroleum products.

He criticized the government for record inflation and alleged that the government did not care about the nation as the rulers had stashed their money abroad.

He called the government “slaves of the IMF and the US” for complying with the demands of the fund to restore the bailout package.

Imran said the IMF had also asked his government to increase the prices of petroleum products but he did not agree.

“Instead of increasing the prices, we decreased petroleum prices by Rs10 to provide relief to the people,” he said, adding that the funds to provide the subsidy were diverted from elsewhere.

He said the coalition government had relented to the IMF demands and hiked prices of petroleum products because “they have no stake” in Pakistan as their children and wealth were abroad.

He also compared the three and a half years of his rule with the two months of the current government. He added that during the PTI’s rule, the price of a 20kg bag of flour increased by Rs326 but during the last two months, there was an increase of Rs422 in the price of flour.

Similarly, Basmati Rice witnessed a hike of Rs55/kg compared to Rs40 during the PTI rule. The price of ghee increased by Rs200 over the past two months whereas the petrol price was increased by Rs60 per litre by the government, he added.

He claimed that the incumbent government did not have an economic plan, they just came into power to “end their corruption and National Accountability Bureau cases”.

“Now, all of their [cases] will be dismissed, and they will get NROs.”

He claimed that the Sharif family had deep relations with Indian Prime Minister Modi and Indian businessmen, adding that being the prime minister, Nawaz Sharif did not meet Hurriyat leaders of Kashmir because it would have displeased his Indian counterpart. Imran Khan said that Asif Ali Zardari was the ‘biggest disease’ of the country whose sickness is ‘money’.

He said that he showed the alleged threatening letter to the National Assembly (NA) and President Dr Arif Alvi also asked the Supreme Court to probe into the alleged conspiracy but no heed was paid.

He reiterated that the Sharifs and Zardari did not speak up against the drone attacks in Pakistan, adding that they could not dare to speak against the foreign powers because their wealth is parked abroad.

He also criticized the presence of Shehbaz Sharif’s absconder son in a meeting with Turkish President Recep Tayyip Erdo?an, adding that the government was not only causing damage to the economy, but also to the morals.

The former prime once again criticized Election Commission of Pakistan (ECP) of being a party of the incumbent government and said rigging had been initiated through gerrymandering because the coalition parties cannot win in the elections on their own.