War against govt to go on until polls announced 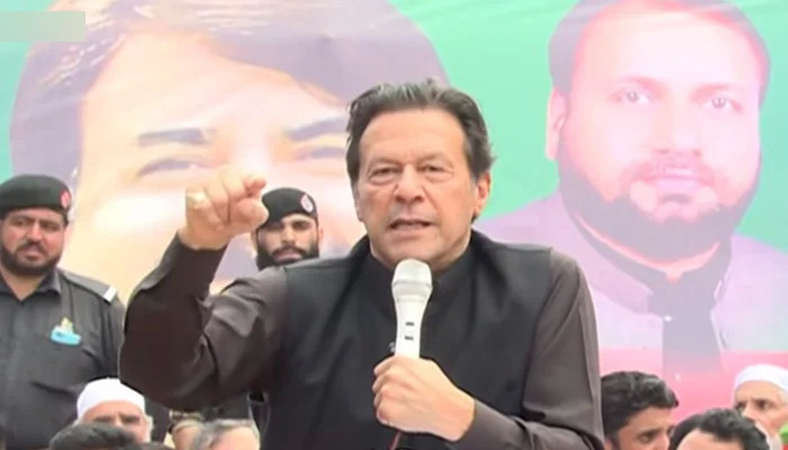 PTI Chairman Imran Khan Thursday vowed to continue his anti-government campaign until the government announced a date for the general elections.

Addressing a public meeting in Shangla, Imran said he would be in the KP for two more days to prepare everyone for the “Azadi March” anew.

“I am strengthening all my organizations in the province and planning everything,” he said. Criticizing the government’s decision to increase the prices of petroleum products by Rs30 per litre, Khan said that the government cannot buy oil from Russia at 30% lesser prices because the United States “does not permit” them to do so.

“Our government wanted to strike a deal with Russia, but it was overthrown with the help of a regime change scheme,” the ousted premier said. He said that the “puppets” of the US were now running the country after he was ousted through a “foreign conspiracy” and the “government is imposing Israel and India’s agenda” on the nation, says a news report.

However, in a conversation with CNN, Finance Minister Miftah Ismail said that importing oil from Moscow is “impossible due to Western sanctions” despite the government’s request to buy wheat from Russia and Ukraine.

“Russia has not offered us any oil either. It is difficult for me to imagine buying Russian oil,” Miftah said in a conversation with the United States-based media outlet. The finance minister said that Russia hasn’t responded to the previous government’s letter seeking imports as it is facing sanctions. Regardless of this, the incumbent government has again asked both Moscow and Ukraine, whoever can, to export wheat to Pakistan.

“We would be happy to buy wheat from them,” he added. Talking about the Pakistani-American delegation that recently visited Israel, the ex-PM said that it included a “government servant.”

He said that his party does not recognise Israel and will not until justice is served to the Palestinians.

Earlier this month, a delegation, which included Pakistanis and Pakistani Americans, travelled to Israel to promote interfaith harmony which received sharp criticism from the Opposition. However, Pakistan’s Foreign Office quickly rubbished reports of involvement, explaining that the trip was arranged by a foreign NGO and not Pakistan.

Imran announced t hat he would unveil his plan of action for his party’s next march at a rally in Dir on Saturday.

“I have a rally in Dir where I will present my next plan of action. We are studying the Supreme Court’s decision,” he said.

The PTI is looking towards the apex court to provide his party “protection” ahead of another planned march towards Islamabad, which would follow his ‘Azadi March’ late last month where PTI workers and supporters had faced intense police action. The purpose of the marches is to pressure the government into calling immediate elections.

Turning his guns towards the coalition government for their alleged torture of the protestors of May 25 march, he said that staging a peaceful protest was a citizen’s democratic right, adding that “brutalising” protesters was not allowed under the constitution of any country. “They can’t win the election. They can’t mingle with the people because they get heckled with chants of chor (thief) and gaddar (traitor).”

He claimed that the government was trying to “rig the polls” in connivance with the Election Commission of Pakistan. “A conspiracy is being carried out to destroy Pakistan’s democracy.” Imran said that the government was harming all the country’s institutions by having its leaders’ corruption cases swept under the rug and by clipping the wings of the anti-graft watchdog.

Addressing the establishment, the PTI chairman said that their neutrality could have consequences for the country.

“Those on top now want to destroy the country. People fear that the country will go bankrupt,” he said, pointing to the rise in inflation and debt.

“If the situation is not steadied and it goes bankrupt, then I have a message for the establishment. The United States and Soviet Union were the world’s biggest powers. But when the Soviet Union’s economy tanked, it broke apart and even its strong army could not keep it together.”

Imran said that even though the establishment said it was neutral, the people would still be looking in its direction as they knew where the “power” lies.

“History will not be forgiving if the nation descends into chaos and you keep on saying that you are neutral,” he said.

The PTI chairman alleged that the government, brought into power through a US conspiracy, would end up bankrupting the country.