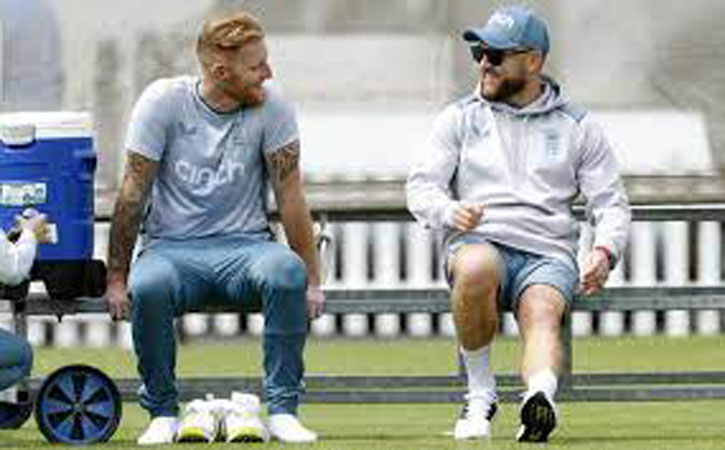 LONDON: England will hope to make a fresh start under their new leadership duo of captain Ben Stokes and Brendon McCullum against the coach’s native New Zealand at Lord’s on Thursday. Stokes, himself born in New Zealand but brought up in Cumbria, northwest England, has succeeded Joe Root as England’s Test skipper after his close friend stood down following a run of poor results. Chris Silverwood’s sacking after a 4-0 Ashes series loss in Australia paved the way for McCullum’s appointment as England’s new Test coach, with the former New Zealand captain’s first match in charge pitting him against a side he knows so well. England hope the attacking approach McCullum pioneered while kick-starting a New Zealand revival that culminated in the Black Caps being crowned World Test champions last year, by when he had retired as a player, will rub off on his new team.

“My job will be to plan as if you’ll live forever, but live as if you’ll die tomorrow,” said McCullum ahead of a three-match series. He would appear to have a kindred spirit alongside him in aggressive all-rounder Stokes. England have also ‘gone back to the future’ by recalling experienced new-ball duo James Anderson and Stuart Broad to their squad at Lord’s. The pair, England’s two most successful bowlers at this level, with 1,177 Test wickets between them, were controversially omitted from a recent 1-0 series loss in the Caribbean.

‘Mindset’: That reverse meant England had won just one of their last 17 Tests and they are now bottom of the World Test Championship table. But a policy of rest and rotation, a consequence in part of tight coronavirus restrictions, is no longer favoured by a new regime keen to concentrate on the game in front of them. Broad is eager to play his part, even though he may be denied a 25th Test appearance at Lord’s this week amid competition from Craig Overton and the uncapped Matthew Potts. “From the outside when you see a Brendon McCullum and a Ben Stokes mindset come together, it’s pretty exciting,” said Broad, 35. “Brendon said to the bowling group: ‘don’t focus too much on economy rates, I want wickets. Let’s try and get as many wickets as we can, as soon as possible’. So it’s ‘where can I get an extra slip from? Where can I get a short leg from?’ rather than being too defensive.”

New Zealand, who could be without Trent Boult following the left-arm quick’s recent arrival from Indian Premier League duty, have had just two warm-up games in England prior to the first Test. Last year, however, they had even less preparation ahead of a two-match series in England and still emerged 1-0 winners before beating India in the inaugural World Test Championship final at Southampton. Playing at Lord’s has inspired many a touring team, with New Zealand paceman Tim Southee — who has taken 20 wickets in four Tests at Lord’s, including five-wicket hauls in 2013 and 2021 that gained him a place on the dressing room honours board — keen to add to his tally at the ‘Home of Cricket’. “It’s a special place,” he said. “I’ve been fortunate to play here a few times and you get that tingling feeling every time you turn up here…You walk in, you look up and I think the first thing everyone does is look up the honours board and you see some pretty cool names.”

But the teams may not be greeted by the sight of a traditional packed crowd for a Test at Lord’s, with some 16,000 tickets over the first four days at the London ground still available 48 hours before the start of the match. Peak ticket prices of £160 ($202) per day amid cost of living concerns may have played a part in reduced sales, with events surrounding the platinum jubilee of Britain’s Queen Elizabeth II another potential factor. But Broad said England had a responsiblity to enthuse their fans. “It’s not just results, it’s the style of cricket,” he explained. “To attract the fans we have to build on that style of cricket and have a style that people want to watch.”