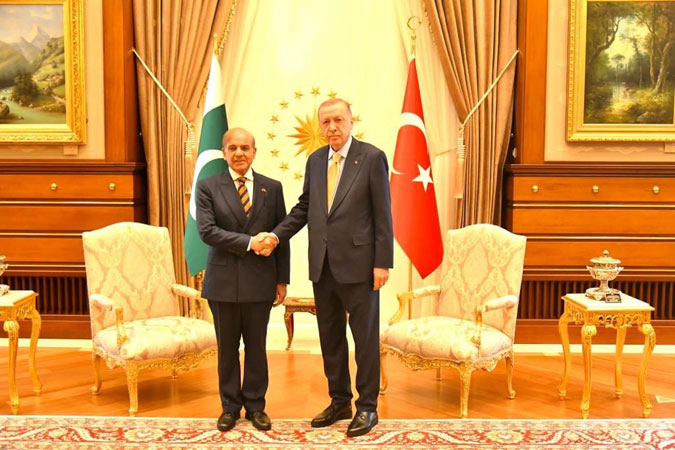 Addressing a joint press stakeout after holding a meeting, Prime Minister Shehbaz Sharif said the relationship between the two countries was embedded deep into history and shaped by shared goals. The ties transcended times and continued from generations to generations, he added.

Both leaders also agreed to holding of 7th High-Level Strategic Cooperation Council (HLSCC), a primary platform at the leadership-level, in Islamabad this year during the month of September. He said this year, the two countries were celebrating 75th year anniversary of the establishment of their diplomatic ties.

The prime minister while terming his meeting with President Erdogan very productive, expressed the hope that under the dynamic leadership of president, the bilateral ties would scale to new heights. He said they had heart to heart and very productive discussions. The prime minister said the two countries were engaged at the high level, which was instrumental in exploring and building their shared goals. He said they were looking towards holding of 7th High-Level Strategic Cooperation Council (HLSCC) in September Islamabad as very productive.

The prime minister said the visit of a strong Turkish business delegation to Pakistan would further provide impetus to the trade and investment cooperation and resolved to make the visit very solid and result-oriented.

He said Turkey had made exponential progress in the field of hydropower generation and renewable energy, and Pakistan was keen for its support and cooperation in terms of profitable investment by the Turkish companies, which would provide low cost energy to it, thus proving to be a ‘win-win situation’.

He said both brotherly countries were natural partners as the two nations had stood with each other in time of need and over core interests. Prime Minister Shehbaz Sharif said the people of Pakistan deeply appreciated the Turkish leadership’s steadfast support over the Kashmir issue. Lauding the unflinching support of Turkey, he said the Kashmiris had been struggling for their legitimate right and subjected to Indian atrocities for over seven decades. He also cited the Indian government’s attempts at demographic changes in the IIOJK (Indian Illegally Occupied Jammu & Kashmir). He reiterated that Pakistan would not abandon its quest for peace, but it was convinced that peace in South Asia was possible if the long standing issue of Kashmir was resolved under the United Nations Security Council resolutions and in line with the wishes of the Kashmiri people.

The prime minister reaffirmed Pakistan’s support to Turkey over Northern Cyprus and resolved that Pakistan stood with Turkey in its fight against terrorism and terrorist groups like the PKK (Kurdistan Workers’ Party). “Enemies of Turkey are the enemies of Pakistan,” he added. The prime minister said both the countries had worked for decades for their shared goals of a peaceful and stable Afghanistan. The countries had hosted the largest refugees in the world with their scarce resources.

He said the warm bonds between the two countries had been close to their hearts, as they went beyond the conventional ties and diplomatic niceties. The bond of friendship was rooted deeply in history and intertwined in the very fabric of their respective societies.

Such a relationship sat in their hearts forever as they were tied with the unbreakable, intertwined and interlinked bonds, which also connected them at all layers i.e; governments, institutions, armed forces and the people.

The prime minister said he was overwhelmed with the love and affection he and his delegation received from the government and from every Turkish citizen. The same reflection of love was also reciprocated by every Pakistani, he maintained.

The prime minister referring to close affinities between the people of the two countries, said Turkey was like their second home as the cordial feelings and the strong relationship between the people had been embedded deep in the common culture, history and religion transcending limits of time. He said such bonds of affection had been a sacred trust passed to them by their forefathers and expressed that they were committed to hand it over to the next generations.

Turkish President Recep Tayyip Erdogan, in his remarks, said during their meeting, they had discussed the regional and international issues in detail. They also reaffirmed to enhance the scope of bilateral ties, he said, adding the high level meeting would be held in Islamabad in September which would provide an opportunity to the both countries to further foster their brotherly ties.

The president said the mutual trade between the two countries had also soared to over $1 billion and they were resolved to take it to $5 billion annually. Tourism, education, logistic and civil aviation were the some other sectors in which they had been working to enhance cooperation, he added.

The president underlined the need for business companies of both countries to increase the mutual investment as it was a driving engine for their economies.

He assured to encourage the Turkish companies to increase their investment in Pakistan.

President Erdogan also reiterated support to the Government of Pakistan in its efforts against terrorism. He also reaffirmed Turkey’s support to Pakistan on the Kashmir issue, stressing for its legitimate resolution. He said both countries were also making efforts to ensure a lasting peace and stability in Afghanistan, and referred to the humanitarian assistance and support extended to the Afghan people.

Earlier, the two leaders also witnessed the signing of various agreements and memorandums of understanding for enhanced cooperation in diverse areas of mutual interests.

PM Sharif said the historical and brotherly relations between Pakistan and Turkey were witnessing a new dimension leading to the progress of the two nations.

He said Pakistan and Turkey had a similarity of views on international issues and the people of the two countries stood by each other in difficult times.

He said there was a strong relationship of mutual trust and respect between Pakistan and Turkey, which had turned into strong economic relations.

Shehbaz said Turkey made rapid progress under the leadership of President Recep Tayyip Erdogan, terming it a role model for other nations.

The Turkish foreign minister said Turkey and Pakistan had deep-rooted relations and expressed his government’s desire to strengthen ties in multifarious areas.