Inferno at superstore in Karachi leaves one dead 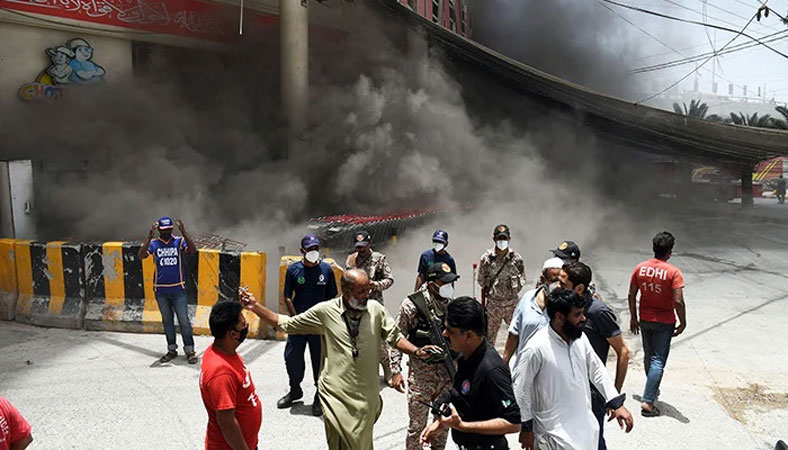 A superstore caught fire early morning hours of Wednesday, leaving one person dead, while the blaze was yet to be extinguished till the filing of this report.

The fire broke out at 11am in the warehouse of the superstore situated on Jail Chowrangi – a very busy street – officials said. The superstore is situated in a multi-storey building and sees a lot of footfall every day.

A fire brigade official said that around 11:15am, they received information about a fire erupting in the basement of Chase Up – the departmental store. Footage from the scene showed plumes of smoke rising from the multi-storey building as officials tried to put out the flames. Thick smoke also engulfed the surrounding area, causing breathing problems for residents and passers-by.

A spokesperson for Sindh Rangers said paramilitary personnel had cordoned off the area and contributed to rescue efforts. The Edhi Foundation spokesperson said that the injured and the deceased had been shifted to Jinnah Hospital. Initially, fire tenders from the nearby Civic Centre were rushed to the scene. However, more tenders were called in from across the city once officials realised the gravity of the situation. Karachi Metropolitan Corporation’s (KMC) Chief Fire Officer Mubeen Ahmed said 11 fire tenders belonging to the corporation, two water bowsers, one snorkel, 13 water tankers from the Karachi Water and Sewerage Board as well as tenders from the Pakistan Navy took part in dousing of the flames.

They had managed to control 70 per cent of the blaze until evening, he said. “However, officials are facing extreme difficulty as the fire erupted in the basement,” he said, adding that there were no entry or exit routes. “We are trying to control the blaze by demolishing the walls of the basement in order to access it,” he said. He also lamented the fact that no thought was given to fire safety at the time of constructing the multi-storey building.

The official was of the opinion that the goods and materials stored in the basement helped the fire spread rapidly. He said the exact cause of the fire was unknown, adding that the true extend of damage would be known once the fire was completely under control. This is the first fire incident at the newly constructed building, Ahmed said, expressing concern that such incidents in the future could damage its structure. The chief fire officer said that they would also assess the extent to which the building’s structure was damaged by the fire.

Speaking to the media earlier in the day, Karachi Administrator Murtaza Wahab said that officials were focusing on damage control and dousing of the flames, adding that they would ascertain the cause once it was completed. However, when asked whether the store had followed fire safety SOPs, Murtaza refused to comment, saying that doing so at this time would be “inappropriate”. “I have asked the Sindh Building Control Authority to dig up the map [of the building]. We will properly investigate it. Our target right now is not to affix blame, but to minimise the damage,” he said, adding that the residents of the building had been evacuated.