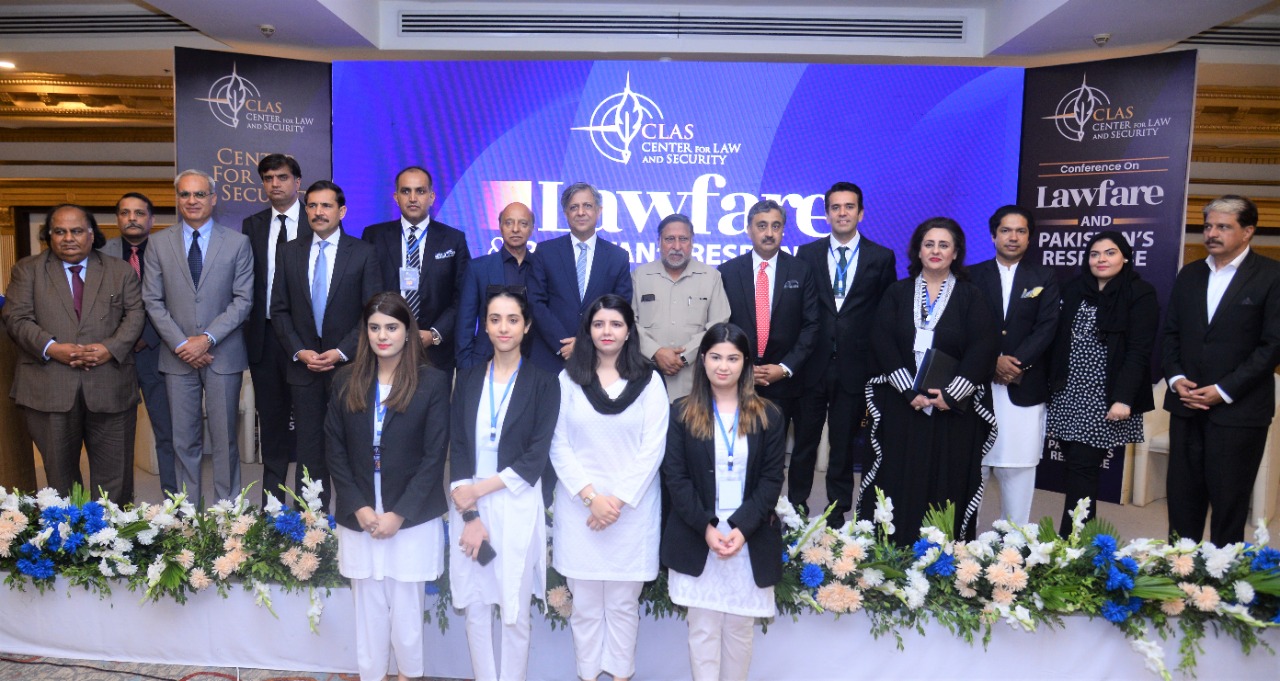 The Chief Guest of the event, Senator Azam Nazeer Tarar, Federal Minister of Law and Justice applauded and encouraged the audience to further promote international law and lawfare, so that the nation can take a serious front towards lawfare strategy. While discussing lawfare, he termed it as a modern day warfare tactic and said that Pakistan must be prepared to address future lawfare challenges. He stressed upon the significance of international law and the need for Pakistan to focus on international law in order to build a comprehensive narrative at international forums.

Dr. Chaudhry Faisal Mushtaq, Chairman Executive Board, CLAS introduced the Centre and thanked the audience for their participation. He stressed upon the fact that it is the responsibility of each and every national of Pakistan to strengthen Pakistan’s position on lawfare.

Justice Ali Nawaz Chowhan, Honorary Chairman, Legal Forum for the Oppressed Voices of Kashmir discussed the use of lawfare by the Western states through sanctions. He also mentioned how it is only a matter of time until lawfare is used against other issues such as water and therefore said it is very important that Pakistan develops a lawfare strategy.

Mr. Imtiaz Gul, Executive Director, Centre for Research and Security Studies discussed various Western countries and the way they used lawfare for their own advantages such as for normalizing India’s illegal occupation in Jammu and Kashmir.

Mr. Taimur Malik, Founder, Courting the Law pointed out the internal issues of Pakistan. He then reiterated that Pakistan needs some focul point, within the limits of which the policies shall be determined on relevant forums.

Barrister Ali Zafar, Partner, Mandviwalla and Zafar, talked about the importance of international treaties in relation to lawfare. He highlighted some historic mistakes that nations have made. He elaborated on how certain policies and laws have affected Pakistan.

Dr. Salma Shaheen, Professor, King’s College London, referred to the internal Lawfare mechanisms of Israel, India, North Korea, US and Pakistan. She highlighted the geographic position of Pakistan, and stressed why we need lawfare system more than any nation in our region.

Barrister Muhammad Ahmad Pansota, Advocate Supreme Court, discussed the rise of disinformation laws and talked about the legal tools that can be used by Pakistan to fight disinformation.

The first session was followed by a panel discussion that was moderated by Mr. Rehman Azhar. The panelists included Justice Ali Nawaz Chowhan, Major General Irfan Arshad, Imtiaz Gul and Mr. Mohsin Kamall. The discussion was focused on contemporary lawfare issues and strategies Pakistan can adopt to counter lawfare moves in the future.

Mr. Rehman Azhar, Executive Director, CLAS emphasized on the importance of lawfare and how adversarial states have been using lawfare tactics against Pakistan. He stressed upon the need to develop a lawfare strategy by Pakistan.