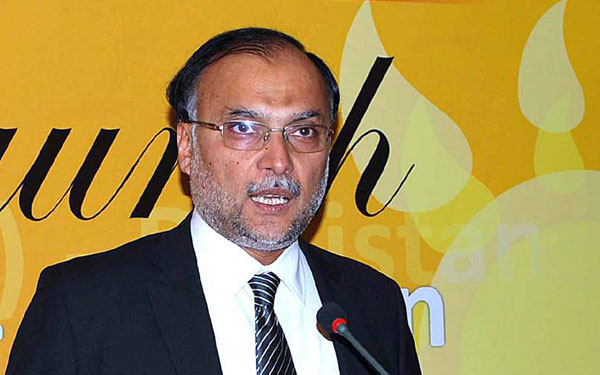 ISLAMABAD: Minister for Planning and Development Ahsan Iqbal Wednesday said Pakistan’s economic development was linked to good relations with its four strategic partners including the US, Europe, Gulf States, and China.

“If we want to see our country developing fast, we will have to maintain good relations with these countries,” Ahsan Iqbal said while addressing the inauguration of the PIDE RASTA conference here.

He said Pakistan’s development journey was moving in a circle.

Ahsan Iqbal said when in 1988 Muhammad Khan Junejo’s government was toppled with a single signature by the then President, he was much upset and decided to struggle for the supremacy of the constitution and democracy of the country.

He said with regret he had to say that no solid progress had been observed during these 35 years and the same thing was still happening now.

The minister feared that if we do not come out of that circle, we will be even behind Afghanistan when we will be celebrating 100 years of independence day in 1947.

He said one thing that was common among the countries that were developing fast that are political stability, continuity of policies, and rule of law.

The countries, he said with no stability and with discontinuities of the policies could never develop. “If there are a reversal of policies every now and then, then how far we hire the most efficient and intelligent people, we will not be able to develop economically.

The minister added that the current fiscal year’s development budget was Rs 900 billion, but by the last quarter of the year, it was confined to only Rs 500 billion and the finance division had no funds to release for the development projects under Public Sector Development Programme (PSDP) 2021-22.

He said when no one in the world was ready to invest even a single penny, China came forward and made investments worth billions of dollars under the China Pakistan Economic Corridor (CPEC).

But unfortunately, he said there was no significant investment in the country under CPEC during the previous four years.

He directed the Pakistan Institute of Development Economics (PIDE) to do research work that how to take maximum benefits from the mega project of CPEC.