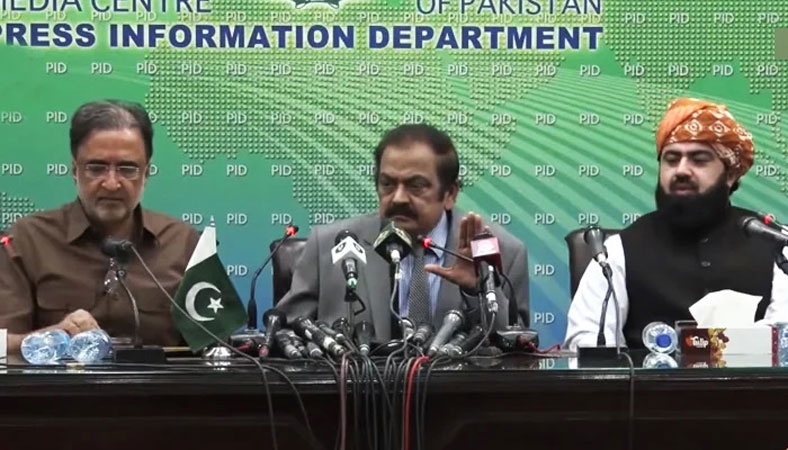 Prime Minister Shehbaz Sharif Tuesday constituted a committee to investigate PTI Chairman Imran Khan’s ‘confession’ that there were armed protesters at the ‘Azadi march’. In an interview with a private news channel, Imran said he feared imminent bloodshed, as some of his party workers were also armed and could have retaliated in the face of the authorities’ hours-long shelling. A meeting of the federal cabinet was held earlier in the day under the chairmanship of the premier to discuss details of the PTI’s long march to Islamabad held on May 25. The cabinet took a stern notice of the PTI leader’s announcement of a “bloody march” and a statement by party workers to bring arms to the federal capital. Subsequently, Shehbaz set up a five-member committee to probe into the ousted premier’s ‘confession’. The committee includes Interior Minister Rana Sanaullah, Advisor on Kashmir and Gilgit-Baltistan (G-B) Affairs Qamar Zaman Kaira, Ayaz Sadiq, Asad Mahmood and Law Minister Nazir Tarar. Shehbaz and Sanaullah informed the cabinet that the interior ministry and law enforcement agencies were instructed to prohibit officials from carrying weapons. The home minister also stated that the protest lodged by the PTI was “not a political activity but a conspiracy against the state.” He assured the cabinet that any “anti-state” activities “would be dealt with severely.”

The cabinet also alleged that the PTI exploited resources from the government of Khyber-Pakhtunkhwa (K-P) to gather and arm groups at the KP House a day before the march. In addition, the federal body took note and expressed grave concern over statements by the KP chief minister as he had conveyed his sentiments to “attack the state and the federal capital with all our might.” Reportedly, the CM G-B also attacked the police officials. The cabinet also congratulated the people for rejecting Imran’s march and stated that the media and the ministry of information’s reporting on the “armed groups and their real faces was commendable.” It also paid tribute to all the law enforcement officials for performing their duties well. Addressing a press conference in Islamabad after the cabinet meeting, the interior minister came down hard on the PTI. State resources were used to further the political agenda of Imran Khan, he alleged, adding that armed police officials from KP were illegally added to the army of the “criminal gang”. He said in order to further the “criminal political agenda”, polarise the nation and mislead the youth, this armed gang attacked the centre and headed towards Islamabad. “When they were stopped at Attock, Mianwali and within Islamabad city limits, they opened fire at police officials,” he said, adding that the protesters also removed obstacles placed to deter them.

The minister said the party misled the Supreme Court and obtained a favourable order, which allowed them to stage a protest at Islamabad’s H-9 park. “[The order] was implemented and we made arrangement for them to stage the protest but then that was not their objective. Their objective was not to carry out any political activity. Their objective was to enter Islamabad and spread chaos and anarchy. Their objective was to seize the capital city and make the government dysfunctional,” he said. He alleged that all the protesters that gathered at D-Chowk belonged to “the same province” and had arrived in Islamabad a day before. “We have marked all the buildings and hotels [where they stayed], we are noting in our report the details of where these people came from and where they stayed,” he said, adding that some also stayed at Parliament Lodges and KP House. Sana claimed that police had only used rubber bullets and tear gas to disperse protesters, asserting that they did not fire a single shot. The minister said he had proposed to the federal cabinet that permission be given for cases against PTI leaders. He said the federal government would have to grant permission for this, as it was the competent authority, adding that the cabinet had proposed a sub-committee to analyse the facts. “If my stance has any weight, then the committee will inform the cabinet of its decision,” he said, reiterating that there was evidence to support the PTI’s true intentions. I am hopeful that the case will be registered and this group will be prosecuted.”