Imran in search of another ‘Saqib Nisar’ in judiciary: Maryam 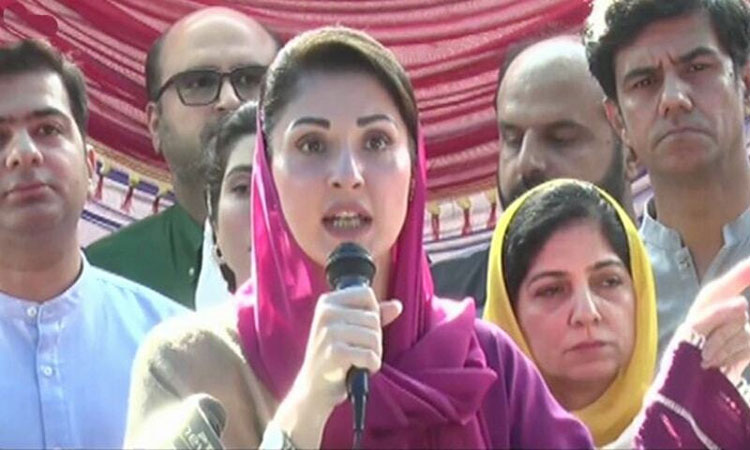 Imran Monday said if the apex court did not protect his party from police action in the next round of PTI protest, he would opt for a different strategy where his supporters would be “prepared” to deal with any situation. Addressing the PML-N’s social media team in Murree, Maryam responded: “He (Imran) is searching for a Saqib Nisar in the judiciary and [also] looking for a [contact] number in the establishment [since the previous one] is now closed.” She accused the PTI chief of trying to drag the judiciary into his “failed politics”. “I was watching TV yesterday and he (Imran) was addressing the courts and the Supreme Court (SC) as if he was ordering them,” she said. “In other words, he was saying to the SC that ‘I’ve been rejected from everywhere … so now only the courts and SC remain, so come and save my life and get my long march carried out’.” Maryam urged the judiciary to not become a part of his “disgusting and chaotic politics”. “He has set out with the intent to turn a few judges of the judiciary into Saqib Nisar,” she added, says a news report. Criticizing the former CJP, she said he had made such “brutal and one-sided decisions” that there was no refuge for him apart from Imran. “Don’t try to fire the gun you’ve aimed at Pakistan’s Constitution, law, politics, progress and people from the court’s shoulder,” Maryam said as she warned the judiciary that if Imran “uses them today then he would curse them in the streets tomorrow”. She criticised Imran, saying that the present condition of the country called on every citizen – regardless of their political affiliation – to play their part due to what she said was the damage caused to the economy by the PTI government. “For four years, the government did nothing except seek revenge or spend official resources on itself,” she alleged. She said there was “zero per cent exaggeration” in the statement that Pakistan’s economy was on the ventilator when her party inherited it last month. Maryam also addressed Imran’s comments from Monday where he admitted in an interview that Azadi March participants were armed. She deemed it “a confession of his crime”. She said the statement had validated the government’s earlier claims of receiving intel about PTI groups being armed for the long march. She said the PTI no longer had any ground to claim that its march was “a political activity or peaceful protest”. Maryam also blasted Khyber Pakhtunkhwa Chief Minister Mahmood Khan’s comments in which he vowed to use the KP’s “force” for the next protest march. She asked what the reaction would have been if another chief minister had uttered such comments.

She said there was no difference between a terrorist and Imran as both used weapons to “attack Pakistan” and set one province against another. “If you want to commit terrorism and dissent then Pakistan will also launch a new Radd-ul-Fasaad against you.” Maryam said Imran was “more dangerous than terrorists” as he was operating in the guise of a political party. She challenged him to shed that cover and confront the state of Pakistan directly. Regarding the recent visit of a Pakistani-American delegation to Israel, Maryam said it had no link with the government which she said still continued to stand with the Palestinians and would not even gaze in Israel’s direction. She called on Imran to cease using the incident as propaganda, warning that he would receive a “befitting reply” in return, referring to his support for his former brother-in-law Zac Goldsmith for London’s mayor. Maryam called Imran Khan a “trouble-maker”, likening the struggle to stop him to a “jihad.” “Imran Khan is spreading unrest and to stop the same is equivalent to waging a jihad,” Maryam said. She said Imran Khan had betrayed everyone who had put their trust in him. She asked national institutions if a “terrorist like him” would continue to remain scot-free, one who is admitting to his ‘act of terrorism’.