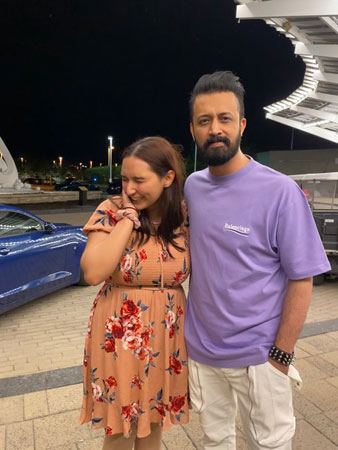 Atif Aslam is a globally Popular Pakistani singer, he is versatile singer. Atif has sung countless hit and popular songs in Pakistan and India and is known for his soulful voice. In later events, the singer has jumped into acting from his television debut Sang E Maah. Fans are loving him in Sang E Maah. Lately, the singer has been doing his concert in Canada. A lot of his fans have been sharing and Tweeting about his concerts but a young female fan has posted the details of her exciting and unusual interaction with the superstar singer, according to the young female fan, the meetup was 45 minutes long. Atif Aslam’s another Fan shared unnusual meetup’s stories and also condidered it to be a “Cordial Meet Up”. Here is what fan shared, “made some fun of me, called me a rondu, a sohni kurri, a cute homeless rondu, a psycho, and played zero kaata with me on my hand because I was shaking, he said kaanp kyun rahi hai, hugged me so tight b/c I was crying and teased me endlessly for 45 minutes” Another fan from the group of girls wrote, “he talked to us for 45 mins. itni jugattein maariii. my friends exposed me about how I wanted to invite him over for dinner before his concert and he said ‘saari barri behn waali show kharab kar di iski’ and he was so kind and humbleeeee!!!