Pakistan, Turkey support each other on all core issues: PM 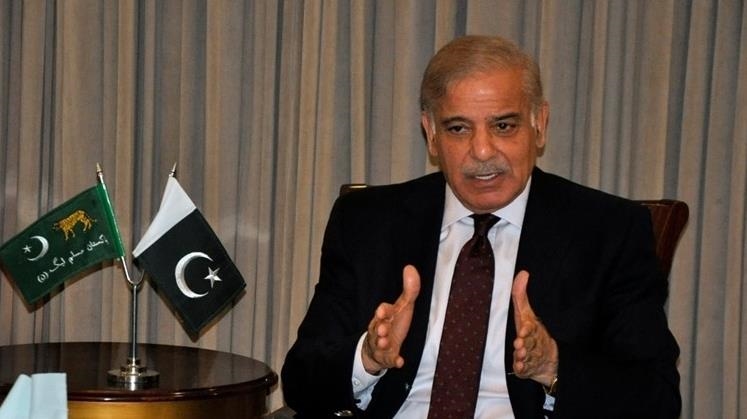 ISLAMABAD: Prime Minister Shehbaz Sharif ahead of his visit to Turkey said that Pakistan and Turkey support each other on all issues of core national interest – whether it is Jammu and Kashmir or Northern Cyprus.

The prime minister in an interview with Turkish news agency Anadolu thanked the leadership of Turkey for its principled support on Jammu and Kashmir dispute.

“Both Pakistan and Turkey have a similarity of views on regional and international issues and enjoy close collaboration on bilateral, regional, and multilateral forums,” Sharif said ahead of his three-day official visit to Turkey.

Terming the Pak-Turkey relations as “exemplary”, the prime minister said historical relations were grounded firmly in common religious, cultural, and linguistic links and transcend political changes on either side.

He mentioned that both countries were celebrating the 75th anniversary of the establishment of diplomatic relations.

“In these seven and a half decades, the two sides have always stood by each other in the face of all changes,” he said, adding that people-to-people and cultural contacts were on an upward trajectory.

PM Sharif said Pakistan was now focusing on economic cooperation with Turkey as the current level of bilateral trade still was not a true reflection of the excellent state of the relationship.

“This is also an area where immense opportunities exist for both countries,” he said.

During the visit, the prime minister said that he would be meeting leading Turkish business companies to encourage them to utilize the immense opportunities existing in Pakistan in various fields, including energy, infrastructure, e-commerce, municipal agro-based industry and IT sectors, etc.

He said with a population of over 220 million, Pakistan offered its investors a strong and large consumer market with an ever-expanding middle class.

On Pakistan’s role in US policy in the region, he said Pakistan and the US had a longstanding and broad-based relationship in various areas of mutual interest.

He hoped that the continued constructive engagement could promote peace, security, and development in the region.

“We wish to deepen and widen our engagement with the US, which remains Pakistan’s biggest export market and a major source of FDI and remittances,” he said.

The prime minister said Pakistan had instituted dialogues with the US in various areas, including climate change, health, energy, trade and investment, which are playing an important role in strengthening our bilateral ties.

He said Pakistan encouraged major US companies to invest in Pakistan’s lucrative market and enhance commercial ties, particularly in the throbbing IT sector.

On China-Pakistan Economic Corridor (CPEC), he said the vision of connectivity and win-win cooperation at the heart of the project was in line with his government’s priorities, as well as the vision for Pakistan as a peaceful, prosperous region.

“With the CPEC, we have successfully realized our two countries’ shared vision and the BRI’s ideals. With CPEC entering a new phase of high-quality development, our Belt and Road cooperation will accelerate Pakistan’s industrial and economic modernization,” he said.

He mentioned that work was underway on CPEC Special Economic Zones, and Pakistan was incentivizing foreign investments in key industrial sectors.

On relations with India, he said Pakistan pursued its shift from geo-strategy to geo-economics, we are looking to forge partnerships, especially within the region, based on connectivity, collective development, and prosperity.

Pakistan and India have a lot to gain from mutually beneficial trade, he said.

However, he mentioned that in the aftermath of the Indian illegal and unilateral steps of  August 5, 2019, Pakistan took a principled stance and curtailed a range of bilateral activities.

“This decision reflected Pakistan’s unequivocal condemnation of the reprehensible Indian design of depriving the beleaguered Kashmiris of their fundamental rights through an unjust and muscular policy,” he said.

He highlighted that in the wake of the continued brutalization of the Kashmiri people, attempts to change the demographic structure of the occupied territory (IIOJK), and continued denial by India of the Kashmiris’ right, its self-determination, it was hard to imagine that progress can be made on the trade front.

“For normalization of relations, India must revisit its actions of August 5, 2019, and not seek further division, bifurcation, and demographic changes in the occupied territory to perpetuate its illegal occupation,” he said.

In order to accrue the utmost benefit from mutually beneficial trade, the onus lies with India to create a conducive environment for dialogue and engagement, he added.

On the situation in Afghanistan, he said the engagement with the interim Afghan government was “not a matter of choice but a necessity”.

He said the world cannot abandon the Afghan people and must shoulder the responsibility to immediately address the country’s humanitarian crisis and fragile economy.

He said Pakistan was emphasizing to the interim government to live up to their international commitments that the country will not be used for terrorism, that girls and women be able to pursue education, and that they form an inclusive government.

PM Sharif said the current authorities in Kabul had repeatedly given assurances to us as well as to the wider international community that they would not allow their soil to be used against any country.

Regarding the Organization of Islamic Cooperation (OIC), he said Pakistan had always played an active and dynamic role to re-invigorate the OIC and forging closer relations with all Muslim countries.

He said Pakistan had always been a staunch supporter of unity and peace among Muslim countries.

“We must promote unity and peace with justice and honour in all disputes and conflicts within and beyond the Islamic world,” he said.

As a Chair of the OIC Council of Foreign Ministers, he said Pakistan would continue to play its positive role and encourage dialogue and negotiations to bridge divides and bring Ummah together.

Asked about his earlier chief ministership, he said as the Prime Minister of Pakistan, he would like to replicate the success and progress that we were able to achieve during his tenure as Chief Minister of Punjab.

About the priority areas of the coalition government among the PML-N, PPP, and other smaller parties, he said the first and foremost challenge was to revive the economy that lost steam during the past four years.

He regretted that Pakistan had witnessed the worst polarization and political partisanship in recent years.

“Our coalition government aims to achieve political normalization through consensus-building on key national issues,” he said.

PM Sharif said another challenge was to ensure result-oriented governance that is capable of making a difference in the lives of the people.

“Our people are suffering from the consequences of the governance meltdown across all walks of life. We have to set this right by reworking the system, and restoring people’s confidence in the government’s ability to deliver services efficiently,” he said.

The prime minister said, “We are also invested in the process of introducing electoral reforms that can deliver transparent, fair, and free elections in the country”.

He mentioned working with coalition partners and other stakeholders in this regard. “The governing principle here is to consult and craft consensus around this vital issue”.

He said the political rivals of yesterday had shown the maturity to come together to address the challenges of today.

He mentioned that he had invited all political forces, including the Pakistan Tehreek-i-Insaf, to sit together and agree on the charter of the economy.

“For Pakistan to break the boom and bust cycle and gain economic stability, it is important that all political forces work out the minimum rules of the game that ensure continuity of economic policies and provide enabling environment for this purpose,” he said. “While we are aware of the menace of political polarization, we are working to promote political dialogue and engagement”.

PM Sharif said his government was committed to improving the socioeconomic indicators, especially for the vulnerable and low-income segment of society.

“We are hopeful that the IMF will release the next tranche, which will build the confidence of the international market for investment in Pakistan, thereby alleviating the pressure on foreign exchange reserves,” he said.