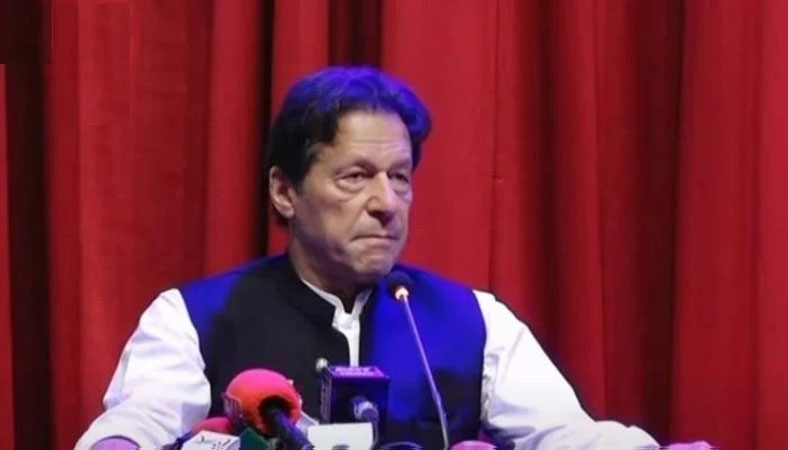 PTI Chairman Imran Khan Monday said if the Supreme Court did not protect his party from the police action in the next round of its protest, he would opt for a ‘different strategy where his supporters would be prepared to deal with the situation’. Addressing a lawyers’ convention in Peshawar, he said: “If they (SC) don’t give us protection, today I stand here in front of you and say that I will have another strategy.” Under this strategy, Imran said the PTI would make a plan for dealing with the obstacles. “[That] time round we weren’t prepared […] we were stuck unprepared. This time we will be prepared,” he said, declaring that this was a jihad for him. “I will not accept this imported government at any cost.” Criticizing the ruling coalition, Imran said they were brought into power through a “foreign conspiracy”. He also lambasted the government for the crackdown on the participants of the Azadi March. “We have asked for a ruling from the SC on whether or not we have the democratic right to stage a peaceful protest. If this is a democracy […] under what basis were we stopped? How can they stop the chief ministers of Khyber Pakhtunkhwa and Gilgit-Baltistan?” he asked. He asserted that his party did not have a “history of violence”, pointing to the PTI’s 126-day sit-in in Islamabad in 2014. He said that he called of the sit-in on May 25 in an effort to avoid bloodshed, says a news report. Imran said the brutality of the police had angered the people, adding that he feared that it would lead to violence and chaos. He said that it would also have developed hatred against the police as well as the army as Rangers had also fired tear gas shells. “I did not want my country to be divided and for our enemies to benefit,” he said. Imran asked the apex court to give a ruling providing an explanation why obstacles were placed to stop the PTI from holding the long march. He also questioned whether the SC would still allow such “undemocratic” moves when the PTI announces the date for its next march. “This kind of brutality doesn’t even happen in dictatorships,” he said.

Imran said that Pakistan was currently witnessing a “defining moment”, and called on the legal fraternity and the judiciary to play their role in saving the country. “I want you all to think of this as a jihad. This is a fight for our true freedom,” he said. He said the future generations would not be forgiving if they did not raise their voice. Turning his guns towards the Sharif family, Imran said that when he entered politics he was warned about them. “I was warned that they were cheap and disgusting and would not spare my family.”

He accused the Sharif family of functioning like a mafia where it would either buy off people’s loyalties or eliminate them. Imran also lamented that the law only applied to the country’s poor, pointing out how the indictment of Prime Minister Shehbaz Sharif and Punjab Chief Minister Hamza Sharif was being delayed.

He recalled that the display of ‘barbarism’ by the government on participants of the long march was not even seen during former dictator General Pervez Musharraf’s era when the Lawyers Movement took place. Imran Khan said that if the institutions do not perform their job, they will expose themselves in front of the masses and become “naked”. “Where our country currently stands, these are defining moments for Pakistan. If institutions do not do their job now, they will expose themselves. They are becoming naked,” he said during an interview with a private TV channel.

Imran Khan, while explaining why he ended the Azadi March last week, said he feared that “bloodshed” was imminent as some of his party workers were also armed and could have retaliated in the face of the authorities’ hours-long shelling and heavy-handed tactics. He revealed his reasoning for doing so, saying that Prime Minister Shehbaz Sharif-led government would have been the ultimate beneficiary of any ensuing chaos and violence.

“The hatred against police had already intensified and seeing me [at D-Chowk] would have further stoked the sentiments of my workers,” he said. “I was a 100 per cent sure that bullets will be fired. People from our side were also ready as some of them were carrying pistols. It would have led to further hatred against the police and the army and caused divisions within the country …,” he told the interviewer. “I was hundred per cent sure the country would have headed towards anarchy in this situation,” he added.