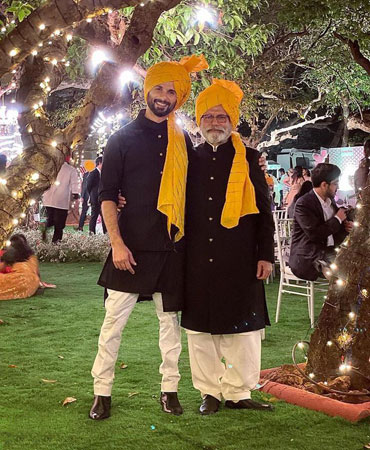 Shahid Kapoor shared a lovely snap with his father and actor Pankaj Kapur on the occasion of his 68th birthday. Taking to Instagram, the Jersey actor dropped a picture from his sister Sanah Kapur’s wedding to wish his dad on his big day.

In the picture, the father-son duo twinned in same black outfits paired with white bottoms as they both donned yellow turbans.

Shahid recently starred with his father in his hotly released sports drama film. Speaking about his experience of working with Pankaj, the actor told CNN-News18, “It was easier to act with him than to have him as a director.”

“It was much more relaxed. We used to get time to chill and have a cup of coffee together in between shots,” he added. In another interview with the Indian Express, the actor had said, “Roles like Arjun and Kabir are so challenging and there’s pressure of not letting the original film down.” He continued: “Then there’s your dad. So there was a lot to deal with. But having him in all those scenes helped tremendously. You end up giving it your best as an actor. It’s always amazing to learn from him.”