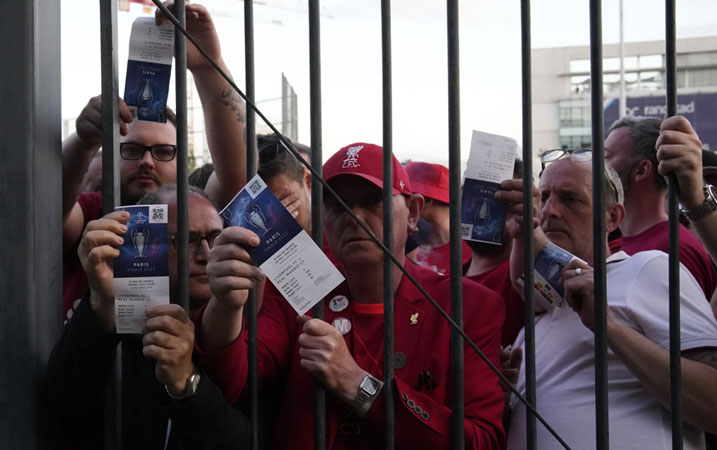 PARIS: France on Monday blamed massive ticket fraud for the chaotic scenes that marred the Champions League final between Liverpool and Real Madrid that raised questions over the capacity of Paris to host the 2024 Olympics. The French government has faced a barrage of criticism from press and politicians in Britain over police handling of the match on Saturday, which saw thousands of Liverpool fans with tickets struggling to enter. Prime Minister Boris Johnson’s spokesman told reporters in London many Liverpool fans were in the French capital “in good time”. “We’re hugely disappointed by how they were treated,” the spokesman added. “Fans deserve to know what happened.” But after a crisis meeting at the sports ministry, French Interior Minister Gerald Darmanin defiantly insisted that ticket scams and the behaviour of Liverpool fans was to blame. “What has been confirmed is a massive, industrial-scale and organised fraud in fake tickets… this was the root cause of the delay to the match,” Darmanin said, also charging that Liverpool fans had been less well-organised than their Spanish counterparts. Sports Minister Amelie Oudea-Castera said French authorities were “extremely sorry” for the approximately 2,700 fans with tickets that were unable to enter the Stade de France because of the crowd control problems and suggested they receive compensation.

The scenes tarnished the image of the French capital, raising questions about its ability to host major sporting events as it gears up for the 2024 Olympics, as well as the 2023 Rugby World Cup. Leading French daily Le Monde echoed the British complaints Monday, saying the French authorities were “in denial” about their shortcomings that had turned the event into a “fiasco”.

Monday’s meeting at the sports ministry involved European football’s governing body UEFA, French football chiefs and the French police. Darmanin and Paris police chief Didier Lallement were both in attendance, along with the Sports Minister Oudea-Castera. Lallement has called for a formal investigation into the production of fake tickets, which he said had helped cause the problems. Darmanin defended the policing of the final, saying officers had “prevented deaths” that might have been caused by crowd crushes outside the stadium to the north of Paris. He acknowledged that some officers had been seen making “inappropriate” use of teargas, after images posted on social media showed even children being targeted at close range.

But he said it was “rather low and disproportionate” to criticise the police, adding: “The decisions that were taken prevented deaths.” The chaos inevitably brought back painful memories for Liverpool, a club haunted by the 1989 Hillsborough disaster which cost the lives of 97 people in a stadium crush. Labour MP for Liverpool area Ian Byrne, who was present at the match, told Sky News that the fans had been treated “like animals”. The mayor of Liverpool, Joanne Anderson, who was also at the scene, told the BBC that it was “absolutely shambolic but also the police behaviour was also really brutal.” Liverpool Football Club have requested a formal investigation.