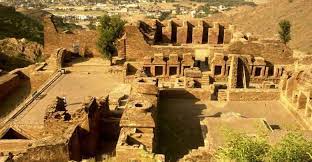 PESHAWAR: Takht-i-Bahi, a UNESCO world heritage site in Khyber Pakhtunkhwa, has attracted international tourists and delegates from European countries, who took keen interest in the archaeological wonder of Pakistan.

The delegates from European countries visited the world heritage Buddhist complex of Takht-i-Bahi in the Mardan district and visited its ancient monastery of the Gandhara Civilization.

Dr Abdul Samad, Director of Archeology and Museums briefed the foreign delegates about historical and archaeological importance of Takht-i-Bahi Monastery (1st CE) and Neighbouring City Remains at Sahr-i-Bahlol of the Gandhara Civilization.

Bhuddist Ruins of Takht-i-Bahi (Throne of Origins) and Neigbouring City Remains at Sahr-i-Bahlol and Jamal Ghari in Mardan were included in UNESCO’s world heritage list in 1980.

The delegation was further told that monastic complexes of the ruins are spectacularly positioned on various hilltops ranging from 36.6 metres to 152.4 metres in height with a covered area of about 33 hectares.

Takht-i-Bahi Monastery was in continuous use till the 7th century (CE) composed of an assemblage of buildings constructed of stone on Gandhara patterns in diaper style using local dressed and semi-dressed stone blocks set in a lime and mud mortar.

Neighbouring City Remains at Sahr-i-Bahlol located in a five kilometres distance from the monastery, is a small ancient fortified town of the Kushan period.

It was constructed on an elongated mound of nine metres height on 9.7 hectares surrounded by portions of a defensive wall in the diaper-style characteristic that dates back to the first two or three centuries (BC).

The boundaries of Sahr-i-Bahlol are well defined with a part of the fortification walls still intact.

The delegation was informed that both these historical sites had been declared as protected monuments under the Ancient Preservation Act (1904) of the colonial era and Antiquities Act (1975) of the Government of Pakistan.

To control urbanization at Bahlol, the KP government has declared the entire mountain area of 445 hectares as an “Archaeological Reserve”.

The delegation expressed its admiration for what they had witnessed and appreciated the efforts of the Directorate of Archaeology and Museums, KP for the preservation of the UNESCO world heritage site.