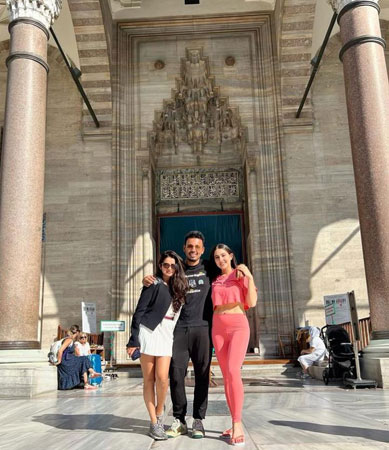 Sara Ali Khan is a travel enthusiast and her Instagram feed is proof of the same.

When she is not shooting for her films and other projects, the actress prefers to explore new destinations with friends and family. Currently, Sara is holidaying in Istanbul. On Saturday, she took to her Instagram feed to share a couple of pictures of her and her friends posing in some picturesque locations of Istanbul in Turkey.

From visiting the mosques in the country with resplendent architecture to enjoying the beautiful weather, Sara has been making the most of her trip to the Middle-East country. For her mosque visit, Sara opted for a pink suit, while she kept it simple in casuals as she explored the city with her friends.

Sharing pictures from her trip, Sara wrote, “Bosses by the Bosphorus”.

Meanwhile, on the work front, Sara Ali Khan was last seen in the film Atrangi Re directed by Aanand L Rai. Sara was well appreciated for her performance in the film which also starred Dhanush and Akshay Kumar. She recently wrapped the shoot of her upcoming film with Vicky Kaushal directed by Laxman Utekar.

She is currently working on Gaslight with Vikrant Massey.