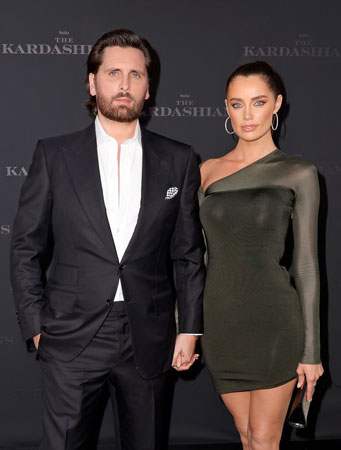 Things seem to be heating up between Scott Disick and new girlfriend Rebecca Donaldson. The two were photographed hanging out on their hotel room balcony in Miami on May 6. The model, 27, wore a neon pink bikini under an opened white button-down shirt. Scott, 38, sported a black T-shirt, matching baseball cap and tie-dye sweatpants. The two were also joined by a female friend on the balcony.

The two, who have not commented on their romance, made their joint red carpet debut in April at the premiere of the new Hulu reality show The Kardashians. Kourtney Kardashian, her fiancé Travis Barker, and her family also attended the event. A source later told E! News that “Scott seeing Kourtney so happy in a relationship was a turning point for him,” adding, “He wants the same and wants to settle down.”

The insider said Scott is “smitten” with Rebecca and is “very serious” about dating her. “He cut all ties with other women he was seeing and talking to, to focus on his relationship with Rebecca,” the source said. “He really likes her and wants a long term girlfriend.” The first few episodes of The Kardashians document Kourtney and Travis’ romance and October 2021 engagement as well as Scott’s feelings about their relationship and his own love life as he continues to co-parent children Mason Disick, 12, Penelope Disick, 9, and Reign Disick, 7, with his ex.

On the premiere episode of the series, Scott, who dated Sofia Richie, 23, and then Amelia Hamlin, 20, after his 2015 split from the reality, told Khloe Kardashian, “Not that Kourtney’s got her life with Travis, as hard as it is, it does give me a place to finally be able to move on.” “If I want to find somebody real and serious, and someone I would actually spend my life with, it would have to be somebody…” to which Khloe then chimed in, “More age-appropriate.”

Scott then joked, “Yeah, like, you know, upper 20s.” He then continued, “But not over 30. Oh fine, whatever. Thirty. I don’t care. whatever it is. If I love somebody, doesn’t matter their age…not sure about that.”