* PTI chief says as long as he is alive, he will not end struggle against 'thieves'
* PTI to go to court to prosecute Shehbaz, Hamza and Rana Sanaullah 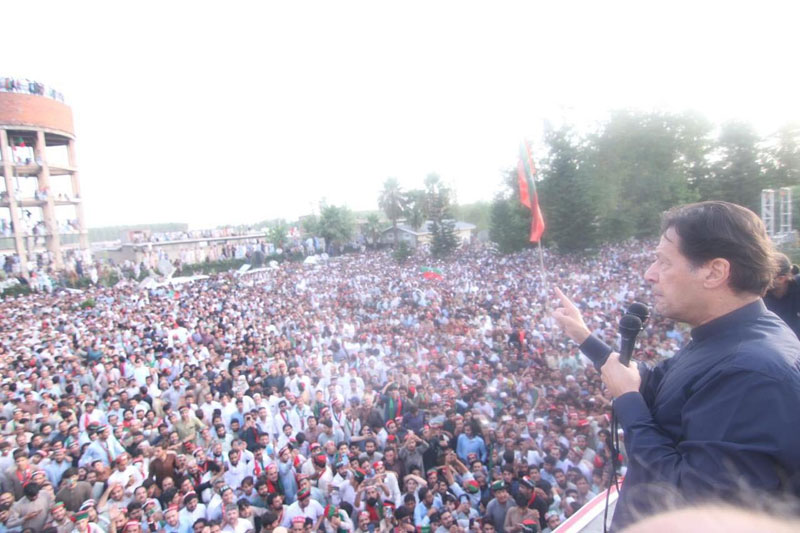 PTI Chairman Imran Khan Sunday once again criticised the incumbent coalition government and alleged that it was going to recognize Israel.

The former prime minister’s comment came in response to Israeli President Isaac Herzog’s statement where he acknowledged that he had had a meeting with a Pakistani-American delegation, terming the encounter “amazing.”

“This government will strike a deal with India to sell the people of Kashmir, and to top it off, they are also going to accept Israel,” he said while addressing the PTI workers’ convention in Charsadda, Khyber Pakhtunkhwa.

Berating the coalition government, Khan said while it “conspired” with the Americans to remove him from power, the people of Pakistan would never accept an “imported government” that has been imposed on them.

“We will not accept these thieves and slaves of the United States,” he said, adding that the PTI was fighting the real war of liberation against those who “robbed the country.”

Speaking about the violent clashes between PTI workers and the police during the party’s “Azadi March,” Khan said that two of his workers – one from Lahore and the other one from Mardan – lost their lives while fighting for the country’s independence, says a news report.

“As long as I am alive, I will not end my struggle and jihad against these thieves,” Khan said.

The former premier censured the government for using force against PTI workers who took to the streets against the alleged foreign conspiracy and said that the Supreme Court had allowed the PTI to protest peacefully as a democratic right but the government tried to sabotage it.

“Listen, Shehbaz Sharif, Hamza and Rana Sanaullah, we will go to court and we will prosecute you and will make sure to throw your corrupt regime,” Khan warned.

“Male police, following your orders, also invaded homes to disrespect the privacy of women.” He also condemned how the police attacked the vehicle of former Punjab health minister Dr Yasmin Rasheed. Khan also criticised the government for increasing the prices of petroleum products and said that the International Monetary Fund (IMF) was also controlled by the United States.

“They have hiked petrol prices because of IMF’s insistence,” he said, adding that the PTI will take to the streets once again to protest against the government. He asked his supporters to prepare for the next march towards Islamabad, saying he would never give up his jehad against the ‘imported’ government. “I ask of the entire nation to prepare and wait for my call for the protest,” Imran told the participants.

Imran said his party would leave no stone unturned this time to prepare for the long march.

Turning his guns towards the opposition, he specifically warned Interior Minister Rana Sanaullah, Prime Minister Shehbaz Sharif and his son Punjab Chief Minister Hamza Shehbaz that they would not be spared for their manhandling of the protesters during the party’s march on Thursday.

“We will make sure that we bring you to justice and get you punished for your actions that day,” he said.

“Those short-sighted men thinking they can crush the most popular mass mobilization in Pakistan’s history, will never be forgiven by history.”

Separately, Fawad Chaudhry, the former information minister, called on the government to not “underestimate the people’s anger” as they are “angrier than expected”. He conceded that there were some “mistakes” that the PTI made that the situation “led to this stage”, without elaborating further.

He also asked if the Zardaris and Sharifs would run Pakistan “for the next 40 years”, and if those decades would be “wasted” like the past years.