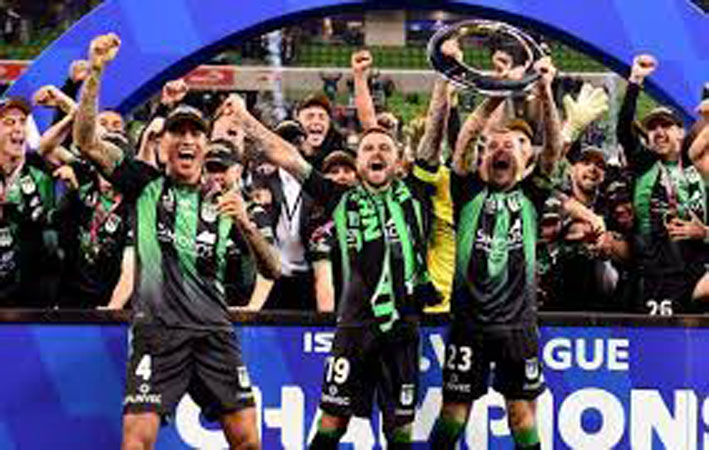 MELBOURNE: Western United stunned defending champions Melbourne City 2-0 to win the A-League grand final Saturday and lift the silverware in only their third season as a professional club. The Melbourne-based United only joined the league in the 2019-20 campaign as an expansion club and were in their maiden decider. But rather than be overawed against more experienced opponents, they quickly took charge at AAMI Park, going 1-0 up inside two minutes thanks to a Nuno Reis own goal. Serbian striker Aleksandar Prijovic got the second on the half-hour mark before they put on a gritty rearguard action as City launched relentless attacks in the final 45 minutes. “It is pretty incredible to see this amount of people for a club that is just three years old,” said captain Josh Risdon, with 22,495 fans in the stadium. “We have got a lot of ambition at this club and we have only just started.” The last team to win the final in their first appearance was Brisbane Roar 11 years ago.

“This was a target of mine when I came here and I’m happy I could fulfil it,” said Prijovic, who has been capped 13 times by his country and was named man of the match. Today the final was very clear, in our favour. From the very beginning we were very sure in the final we were going to win.” Defeat was deflating for City who had finished the regular season in first place and were widely seen as favourites on their home ground. They were looking to emulate sister club Manchester City and win back-to-back titles. Formerly Melbourne Heart, they were taken over by City Football Group — which owns Pep Guardiola’s Premier League title winners — in 2014 and after years of struggle have become the benchmark in recent seasons.

But they were under the gun from the start, behind in the second minute after they conceded a corner and Reis headed into his own goal under pressure from Ben Garrucio’s lofted ball. It was the fastest goal ever in a grand final and United kept the pressure on as rattled City struggled to settle and pose any threat. United, coached by former Socceroo John Aloisi, were sharper and faster and kept pressing with City’s Curtis Good forced to clear off his line before Prijovic doubled the lead minutes later. But it needed a VAR decision with the Serb initially flagged offside only for referee Chris Beath to overrule the decision, which replays showed was correct. City had renewed vigour in the second half and Mathew Leckie rattled the crossbar soon after the restart, then Andrew Nabbout went close as they started asking questions. But United’s defence held firm under waves of attacks with goalkeeper Jamie Young pulling off fantastic saves from Nabbout and Scott Galloway to ensure they pulled off the biggest win in their short life.