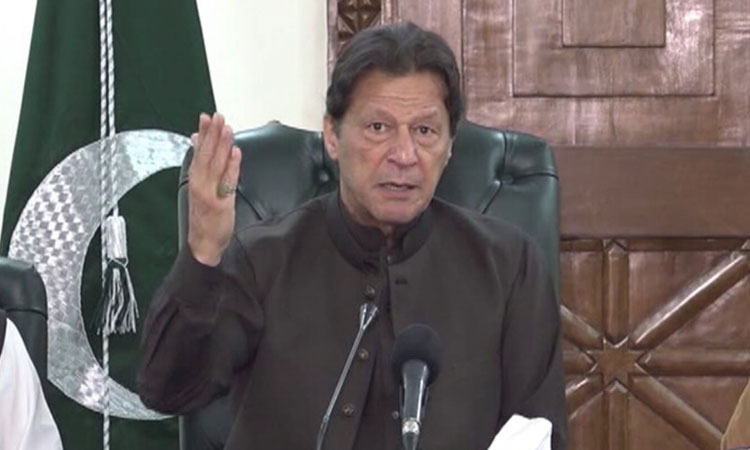 Pakistan Tehreek-e-Insaf (PTI) Chairman and former prime minister Imran Khan on Saturday said they are going to move to Supreme Court (SC) on Monday against the assault on long march protesters by the ‘corrupt’ government, adding that they are ready for dialogue on one-point agenda of date for new elections.

Speaking to the reporters in Peshawar after PTI’s core committee meeting, he said that the government ‘assaulted’ peaceful protesters and did shelling on them, adding that families with children were part of the long march.

He said they were not mentally prepared for what happened after the orders of the Supreme Court, assuming that the orders would be implemented by the government. Imran Khan said they would ask the top court if staging a peaceful protest is allowed in Pakistan, adding that PTI has never resorted to politics of anarchy.

He announced going to the SC for cases on Lahore CCPO, DIG Operations, and Islamabad IG for what they have done with the people. He added that photos of the police personnel would also be circulated on social media, so people recognize their faces.

The ex-prime minister told the judiciary that the current situation was a “test” for the judiciary and hoped that the apex court would give clarity over holding jalsas. “The Supreme Court had directed the government to remove all the hurdles […] but we were not ready for what the government did in response,” Khan said about the riots in the capital.

The PTI chairman also announced moving the court against the alleged revocation of the right to vote to overseas Pakistanis and the amendments to the National Accountability law.

The ousted prime minister alleged that the government tried to crush a “peaceful protest”; but warned that in the next phase, PTI would come with complete preparations.

“The ones who burned the trees were not our people,” the PTI chairman said, defending his party after there was an outrage for setting trees ablaze during the protest in Islamabad.

Khan also clarified that his party would not establish a militant wing, adding that he did not wish for violence to take place.

“They [PML-N] are fascists, whenever they come into power, they use force,” claimed the former prime minister.

The PTI chairman further announced that his party would get first information reports (FIR) registered against police personnel involved in stopping the rallies and would also share their photos on social media.

Khan added that he had cut short the long march after witnessing anger among the people. “The people were angry on rangers as well after they used tear gas […] and we also had no idea about the way that police would use force against us.”

Despite all the issues that have taken place in the last few days, Khan reiterated that the doors for negotiations should always remain open as he did not want war, but snap elections.

“We can easily hold talks with them if they announce early elections in June,” Khan said, adding: “It is not just our job to save the country, the institutions are equally responsible.”

Lashing out at the government for increasing the price of petroleum products by Rs30, the ousted premier said his regime was about to strike an agreement with Russia for cheaper oil.

“They did not carry on with the deal. Instead, coming under IMF’s pressure, they hiked the price of petrol. They could have purchased cheap oil, but they did not do that due to the fear of foreign powers.”

Finance Minister Miftah Ismail two days back announced a massive hike in the price of petroleum products after the IMF emphasised abolishing the subsidies on commodities.