No dialogue, NRO-type concession for Imran 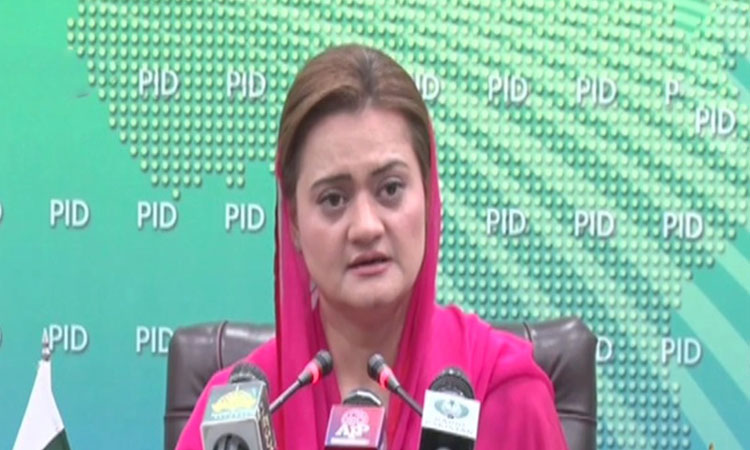 Minister for Information and Broadcasting Marriyum Aurangzeb on Saturday ruled out any NRO-type concession for PTI Chairman Imran Khan over misuse of authority during his four-year rule, which was marred by corruption, nepotism, loot and plunder.

“Imran Khan Sahib, you will not get an NRO [National Reconciliation Ordinance],” she said, while rejecting his negotiation offer based on dictations and threats to the government.

Addressing a news conference, the minister said talks with Imran Khan would be meaningless until he changed his attitude and abstained from using abusive language.”Imran Khan stated that he would hold dialogue if the date of fresh election were given in June. I am giving you the date of election today, i.e., of August 2023,” she said, asking the Pakistan Tehreek-e-Inasf (PTI) chief to keep “that date” in his mind.

Marriyum reiterated that the election date would be announced by the Pakistan Muslim League-Nawaz and its allies after the completion of their government’s constitutional term. “Nobody will be influenced by your dictations, threats, bullying and abuses,” she said, asking Imran Khan to wait for a date in 2023 when the general election would be held in the country.

“Stay at home if you want the dialogue on this issue [general election], and if you come out with arms, bullets, batons and announcement of a bloody march then there will be consequences…,” she observed.

The minister urged the PTI Chairman to abstain from further polarizing the society, and creating unrest, chaos and anarchy. However, “being in a critical mental condition, he should better stay at his Bani Gala residence and take rest by taking a tranquilizer, and let the government serve the people, who want peace, development, progress, end of corruption, jobs and relief from the inflation left by his (Imran’s) government at the highest level,” she remarked.

“I also advise him to refrain from appearing on the TV screens in such a mental condition,” Marriyum said. He should better introspect as to why he had failed to deliver in the last four years when he had all the power and government offices at his disposal through which maximum relief could have been given to the masses.

Now his mourning of the bad performance would not make any difference as the people had rejected him and his politics of unrest, vandalism and arson, she added.

The minister asked Imran as to why he wanted to come into the power again after failing to fulfill all the promises he had made with the people, including ten million jobs, end of corruption, and transformation of the country into a Madina like state. “Why do the people trust him again when he could not construct a road and build hospitals, schools and universities while in power?” she questioned.

Reacting to Imran’s statement of returning to the power with a two-third majority, the minister said the people would never give incompetent, corrupt, cartels and mafias the responsibility of running the state affairs again. Those who were given the responsibility of running state affairs must have the credibility and track-record of performance, she added.

She also mentioned other milestones achieved by the PML-N governments in the past, including construction of motorways, road infrastructure, hospitals, public transport, power projects and many others. The PML-N, she added, still had the capability to ensure development and progress of the country. Now, the country had Shehbaz Sharif as its prime minister who was working day and night to steer it out of the crises inherited from the PTI’s government.

Reacting to Imran’s statement on the Model Town incident, she said the matter had been decided. “If he had any reservation on it then why he did not pursue the matter while being into the power for four years?” she questioned. Commenting on Imran’s claim of peaceful march towards Islamabad lately, she said Imran could not be trusted as the “massive brutalities of his party’s 2014 sit-in” were on the record.

The nation witnessed as to how “his party goons” had attacked the Parliament and PTV buildings, inflicted head injuries to policemen, and incited people for civil disobedience, she recalled. “How can the people forget that the graves were dug at D-Chowk, announcements were made to kill the political opponents.” Now again the people could not forget that it was Imran Khan, who announced a bloody march towards Islamabad after he was voted out of the Prime Minister House, she said. “It was Imran who had made preparations for vandalism, arson, and inflicting injuries to the policemen.”

After the apex court’s decision, she said, the PTI workers set the metro station on fire, besides burning trees and tyres at D-Chowk. Whether setting metro stations, official buildings and trees on fire, and giving call for a “bloody march” after amassing weapons and batons was a democratic right, she asked.

Ironically, she said, the leader was airborne, when he called his workers to reach D-Chowk and use brute force against the policemen. After descending from the helicopter, he (Imran) went into the container and remained on it till next day, but did not go to the D-Chowk, abandoning his workers abruptly. He could not gather even 35,000 people despite dolling out Rs 3.5 million to every PTI member of the National and provincial assemblies by the Khyber Pakhtunkhwa government for making arrangements of the long march, she added.

Recalling the political activities of Pakistan Democratic Movement during the tenure of PTI government, she said the country had witnessed as to how rallies and public gatherings were held in a peaceful way. She asked Imran to name a single incident of baton charge on the police by the workers of PDM whose leadership faced “stinking accountability” under the Imran led government.

She also lashed out at Imran for threatening the courts and institutions and said the court had already given a decision against the unconstitutional steps of the Imran-led government. The court opened midnight to stop Imran from violating the constitution and reversed the ruling of the then deputy speaker over the vote on the no-confidence motion.

Marriyum said the current government was representing 90 per cent people of the country. Imran was ousted from the government in a constitutional way. To a query, she said strict action would be taken against the PTI if it launched a smear campaign against the Law Enforcement Agencies on the social media.