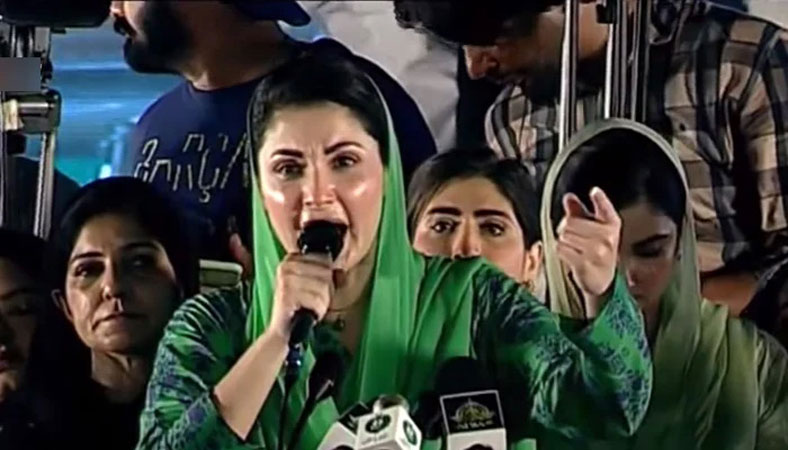 Speaking at a public gathering in Bahawalpur, the PML-N vice president said: “Imran Khan, the revolution that you want to bring through the Supreme Court, the SC itself, along with the people of Pakistan, will foil it.”

Maryam said Khan first drags institutions into politics and then utters abusive words for them.

“Therefore, with respect, I want to ask the Supreme Court to maintain distance from the politics of this anarchist (Khan) as the Supreme Court is an institution of Pakistan and it should remain impartial,” she added.

She said that Khan’s long march had failed, and this time, he sought help from the apex court. “Is this the court’s job to save Imran Khan from his failures?” asked Maryam. Moving on, the PML-N leader said that Pakistan faces no
danger from foreign powers but the country faces a threat in the form of Khan.

“Pakistan is at risk from the fitna and fasad – Imran Khan,” she added. The PML-N vice president said that the coalition government had to increase the prices of petroleum products because of the agreement between Khan and the International Monetary Fund (IMF).

“Shehbaz Sharif announced the biggest relief package of Rs28 billion for the nation in the history of Pakistan,” said Maryam, adding that PML-N supremo Nawaz Sharif and Shehbaz will take the country out of the crisis within a few months.

“Khan started begging Nawaz Sharif two days before the march to announce a date for the elections when he saw that his march was failing and said he would call off the march in return,” claimed the PML-N leader.. She said that the ex-PM could not even gather 25,000 people from all over the country, and then he claims that the preparations were not done.

“You used all the resources from Khyber Pakhtunkhwa and gave money to your leaders to gather people for the march,” she added.

Criticising the former prime minister further, Maryam asked: “You failed to prepare for the march, but you prepared to set fire and attack the police?” The PML-N vice president also said that ever since Khan was ousted, he started worrying about inflation.

“Khan said he was about to strike a deal with Russia to get oil at cheaper rates. Why did the agreement not take place?” she asked.

“Were you waiting for Farah Gogi’s signature on the agreement?” asked Maryam, adding that “when the time came for Gogi to sign, she escaped Pakistan to Dubai.”