Hania spills the beans on her engagement plans 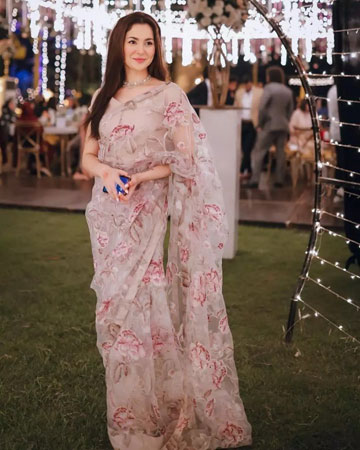 ‘Mere Humsafar’ star Hania Aamir has spilled the beans on her engagement plans and the lucky guy in her life.

In a clip doing rounds on social media, Hania Aamir can be seen speaking about marriage plans during the promotions of her movie. Responding to a similar question, she quipped, “When will I get a guy, not able to find any.”

“I’m very direct, and I think my audience also knows that when I like something and wants it, in love with or anything, it shows and is very obvious,” she further told the interviewer.

“I can’t hide it or anything,” added the dimple girl.

After marking her screen debut with a pivotal role in the 2016 title ‘Janaan’, Hania Aamir soon became a favorite of creators and audiences alike. In her short career span, she has impressed the audience with stellar performances in superhit serials including ‘Visaal’, ‘Ishqiya’ among others.

The ensemble cast of the family drama includes Waseem Abbas, Saba Hameed, Zoya Nasir and Samina Ahmed among others.