* Shehbaz says govt will immediately provide Rs 2,000 to around 85m families
* PTI regime's decision to grant fuel subsidy a 'trap' for the next government 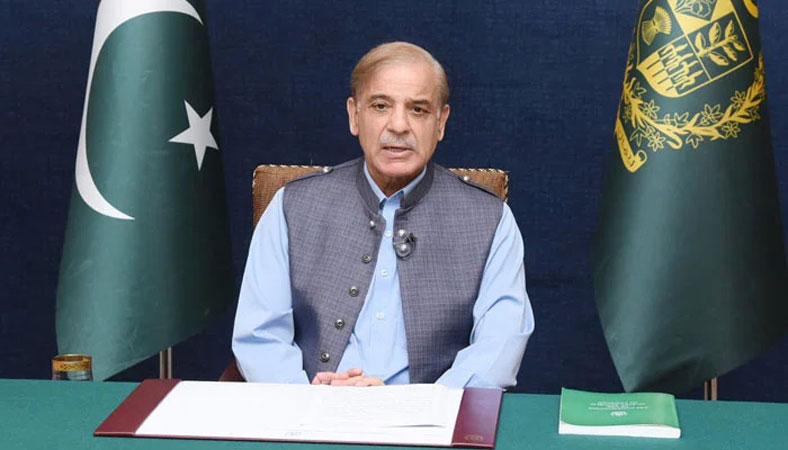 Prime Minister Shehbaz Sharif on Friday said that the government will include a Rs28 billion package in the upcoming budget to provide relief to the masses.

Addressing the nation, the prime minister said that aside from the relief package, the government would immediately provide Rs 2,000 for around 85 million people to help them fight the effects of inflation. “This is aside from the Benazir Income Support Programme (BISP) monetary assistance that they are already getting. This relief package will be included in the next fiscal budget,” the premier said, adding that he has directed the Utility Stores Corporation (USC) to provide 10kg of wheat to people for Rs400.

Shehbaz said his government’s move to increase fuel prices was necessary to avoid Pakistan from facing bankruptcy. “The previous government is deliberately concealing facts. I want to remind them that you entered into a deal with IMF, not us. You accepted their harsh terms, not us. You pushed the country into economic mess, not us.”

He termed the PTI government’s decision to grant fuel subsidy a “trap” for the upcoming government. “The prices of petroleum prices are increasing worldwide but the PTI government provided subsidy on fuel despite knowing that the treasury cannot bear its burden.”

At the beginning of his address, the prime minister said that taking up the challenge of coming into power was not easy as the country’s situation was gloomy, and the nation was plagued with hatred during the previous government’s tenure. “I would like to thank my leader Nawaz Sharif and the leaders of our allied parties for trusting me with this office,” he said.

Criticising the PTI-led government and ex-prime minister Imran Khan, PM Shehbaz said that “it was the demand of the people of Pakistan to rid them of the previous incompetent and corrupt government.”

Shehbaz said a diplomatic cable was used for political means and the nation was fed with lies despite the National Security Committee (NSC) and the ambassador to the United States both rubbishing the “foreign conspiracy” claims touted by ex-premier Imran Khan. He said if Khan thinks his “ego” is bigger than the state, then it is his misconception as Pakistan will function in line with the Constitution and not upon the wishes of one person.

“This person, when Pakistan was progressing under prime minister Nawaz Sharif, staged dharnas. At that time, Chinese President Xi Jinping had to come to Pakistan, but due to [Khan’s] arrogance, the agreement that was scheduled to take place was delayed,” Shehbaz said, adding that the incumbent government is responsible for the nation’s safety and security and would not compromise in this regard at any cost.

He said the previous government’s tenure also proved costly for Pakistan on the diplomatic front. “A most trusted friendly country – the one that supported us in all difficult circumstances – was made upset. But we have started the rebuilding process,” the premier said in an apparent reference to the United States. He also recalled that the incumbent government reversed all measures taken by the ex-government that curbed the freedom of speech, including scrapping a proposal for the controversial Pakistan Media Development Authority.

The premier said he took charge of the government at a time when the country was facing a myriad of crisis. “We knew the remedial measures will take much effort and time to yield results, but we still took up the reins for the sake of the country.” Without naming former PM Imran Khan, he said lies were spoken to the nation about a “foreign conspiracy” to further “political goals”. He went on to say that “this man hurt diplomatic relations of Pakistan for his personal interests.”

Reminding the PTI of its performance during its tenure, PM Shehbaz said it was Khan that struck a deal with the IMF, not the current government. “We did not agree to the strict conditions laid forth by the IMF; you burdened the masses with heavy inflation, not us; you buried the country under heavy debts, not us; international institutions said that corruption increased during your tenure, not ours; electricity load shedding was brought back during your tenure and you are responsible for the economy’s suffering,” he said. He said that over the last 3.5 years, Pakistan incurred more than $20,000 billion worth of debt, which was more than 80% of the total loans taken during the history of the country. The prime minister said the incumbent government was ready to take tough decisions for moving the country towards progress in a bid to end the politics of “incompetency and corruption”. He added that when the new government came into power, inflation was skyrocketing, industries were shutting down, and the US dollar – which was at Rs115 – had reached Rs189. Providing details of why the government hiked prices of petroleum products, the prime minister said the rates of petrol and diesel were skyrocketing across the world. “From oil-producing countries to developed countries, everyone was gripped with economic turmoil. But for political gains, the previous government announced a petrol subsidy for which there was no room in the national exchequer,” the premier said. But keeping aside our political interests, we took the decision to hike petrol prices and save Pakistan from default. “The decision is the first step towards developing Pakistan.”