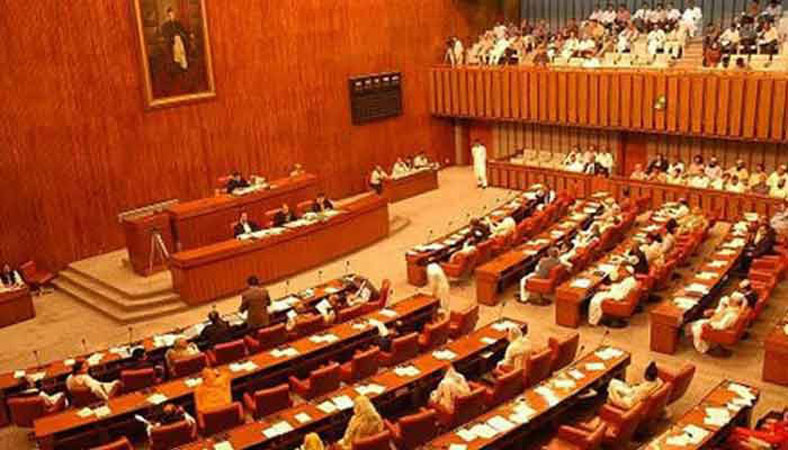 Earlier, both bills were approved by the National Assembly on Thursday without resistance. During the session chaired by Senate Chairman Sadiq Sanjrani, Minister for Parliamentary Affairs, Murtaza Javed Abbasi moved both the bills.

Minister for Law Azam Nazeer Tarar said the Pakistan Tehreek-e-Insaf (PTI) government had made several amendments to the Election Act, 2017, including those that allowed the use of electronic voting machines (EVMs) and granted overseas Pakistanis the right to vote in general elections.

Tarar insisted that the voting right of the overseas Pakistanis had not been withdrawn.

“This right is not abolished, it is still there,” he added. He said the Election Commission had been asked to ensure the right to vote keeping in view the secrecy. The ECP should ensure the voting rights of the overseas Pakistanis, he added.

Tarar added that after the passage of the bill, the National Accountability Bureau must complete all inquiries within a period of six months. He said that the PTI government had extended the tenure of incumbent NAB chairman by promulgating an ordinance and that various honest civil servants were put behind bars without any cogent evidence.

The members of the opposition staged noisy protests during the passage of the bills. They surrounded the dais of the Senate chairman and tore apart the copies of the agenda.

They raised slogans against the government, terming it an imported one which was not acceptable.

The Senate passed the Elections (Amendment) Bill, 2022, making certain amendments in some sections of the previous Elections Act, 2017.

Minister for Parliamentary Affairs Javed Murtaza Abbasi presented the bill before the house to amend the Elections Act, 2017, which was unanimously passed by the Senate.

The house was informed that Sections 94 and 103 of Elections Act 2017 were amended vide Act No.LV of 2021 for using I-voting and Electronic Voting Machines (EVMs) from the next General Elections.

Defining the reason, the house was informed that “the Election Commission of Pakistan (ECP) faces technical difficulties to embark upon conducting elections as per amended provisions clauses.”

“Since Article 218(3) of the Constitution obligates the ECP to conduct free, fair and transparent elections, the instant bill proposes to restore the amendments of Act No. LV of 2021 to their original contents for conducting more pilot projects before using I-Voting and EVMs in general elections.” The house passed the insertion of new section 72B, Act XXXIII of 2017. Now in the said act, after 72A, the new section 72B will be inserted namely ’72B.Effects of section 72A’.